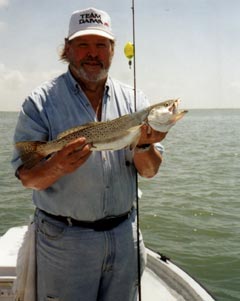 If you have been reading this space for long, you have probably figured out by now that one of my favorite destinations on this planet is the middle Texas coast, or the Coastal Bend as the locals call it. It is the area where a stretch of the Texas coast follows a long, arching curve to the southwest.

My lure to that part of the coast has a lot to do with the laid back lifestyle and the easygoing attitude of the friendly folks that live there. Of course, for an avid saltwater fisherman like myself, it is impossible to resist the scent of the salt air, the sight of the numerous shorelines, and the lure of fishing the miles of pristine shallow bays along the coastline that are swarming with game fish! Just the glimpse of the deep blue-green waters along some of the desolate shorelines is enough to quicken the pulse of the most hardened of old salts.

When the Port Aransas and Aransas Pass Chambers of Commerce, along with the Coastal Bend Guides Association, got their collective heads together to put together the Annual Fall Outdoor Writers Round Up to spread the word about all that the area has to offer, it was an easy selling job. Furthermore, when an invitation came for me to attend, it was a no brainer decision to accept. I packed my gear and left in no time flat.

After checking us into the Hawthorn Suites on the mainland, our hosts rolled out a big chunk of red carpet for the 20 or so writers, editors, and photographers lucky enough to get invited. At a welcoming reception held at Virginias on the Bay, we munched on shrimp and hors doeuvres and visited against a backdrop of sailing masts, boats, and a spectacular view of the Port Aransas Harbor on Mustang Island.

During the evening, we renewed old friendships and met several of the guides who agreed to share their knowledge of the local bays and their reefs, coves, and grassy shorelines. For the scheduled fishing trip the next morning, I was matched up with Captain Don Miller (361-775-1124), a retired AT&T manager and knowledgeable fishing guide who lives on the bay.

The next morning brought a spectacular sunrise and a clear, crisp fall morning on a calm bay. The good news is that it was a gorgeous, cool morning to be on such beautiful waters; the bad news is that a cool front had slipped in two days earlier and dramatically dropped the temperature and raised the barometric pressure. These conditions usually make game fish more sluggish and feed less aggressively. At least, this is what folks who know about such things tell me.

We started the morning fishing with topwater lures. It was a perfect match slashing the floating lures into the slick, calm surface of the bay. We were drifting with the aid of a trolling motor along Stedmans Reef, a long, shallow formation in the lower end of Aransas Bay. We had caught an occasional undersize redfish and were preparing to relocate.

The drag on Capt. Dons reel sounded, and he lifted his rod against a heavy fish as line sizzled off his reel. After a short battle, his line went slack. One slap of a broad tail, and the big fish was gone. He reeled in his line and the only thing he hooked to his lure was a big chunk of moss and marsh grass. We figured the big redfish had nosed into the shallow bottom and snagged the lure on the thick vegetation. It happens! An unplanned release of a big fish is just a part of fishing.
The decision was made to run the few miles down the coast and fish Nueces Bay where there had been some reports in previous days of heavy stringers of trout.

On our journey to Nueces Bay, the distant skyline of Corpus Christi seemed to rise out of the deep green waters of the bay like a modern day Atlantis. We motored under the Corpus Causeway and fished several reefs, flats, and a couple of flocks of circling seagulls working schools of fish. We caught enough fish to keep it interesting and exciting. Many of the fish came up just short of the legal size and were released back into the waters of the bay. The number of undersized trout and redfish we caught provided a little excitement and indicated a healthy population of gamefish in the bays. Small fish grow into big fish!
We made the journey back to the dock at Aransas Pass, stopping to check out a few shorelines, pot holes, and reefs on the way. All of our groups came back with tales of elusive fish and an occasional story of the big one that got away.

Our groups ultimate reward came that evening when our hosts turned our catch into mountains of golden fried fillets with all the trimmings.

The friendly folks in Port Aransas and Aransas Pass will have an easy time beckoning me back to their stretches of coastal paradise to share a vivid sunrise and fish their pristine shorelines.