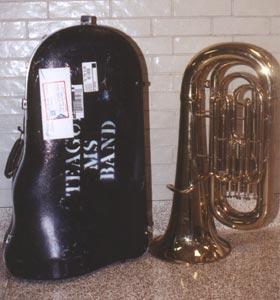 This little adventure has all the ingredients for a good story. It involves a mystery, a chance encounter, coincidence, a journey, a bit of sleuthing (detective work) and a Good Samaritan. And it all revolves around a missing tuba.

Each year hundreds of thousands of students participate in middle school band across the nation. So, its not unusual to discover more than a hundred students participate in band annually at Aldine ISDs Teague Middle School. Year after year, students buy their own equipment while the bigger and more expensive pieces are owned by the school and loaned to students.

Its also not unusual for students to move during the school year and forget to return loaned items such as books and band instruments, or more specific to this story a concert tuba.

While it is unknown what became of the tuba for six years, its journey home began 1,119.5 miles away in Denver, CO. In a chance encounter, Gloria Mowdy discovered the tuba while helping friends move into a house. Someone had apparently left it behind. Mowdys friends didnt play the tuba and asked if she wanted to keep it. Mowdy took the tuba home. By sheer coincidence, her friend Dale King in Enid, OK was a former tuba player in high school and college. Mowdy decided she would give him the tuba since he would probably make good use of it.

A few months passed before the tuba traveled 639.36 miles to Enid, OK where Mowdy dropped it off with King. He didnt do anything with it at first. It wasnt until recently that King looked at the instrument carefully and found that it was in reasonably good condition with only the mouthpiece needing some repair.

He also discovered the instruments case had Teague Middle School written on it. A former school band director himself, he decided to see if he could figure out to whom the tuba belonged. King knew that such an expensive instrument meant a lot to any school band program. He began his investigation on the Internet where he turned up two middle schools named Teague: one in Florida and one in Texas. He decided to call both to see if either had the serial number of the missing tuba on file.

Its hard to believe that anybody would go to that kind of trouble to return a lost tuba, said Principal Michael Gallien. I have to admit that in my 15 years at Teague, this is the first call I have received about returning a lost tuba.

The instrument is a Boosey and Hawkes concert tuba. Today, the approximate value of this type of instrument is $1,400. To be frank, Im stunned to be getting the tuba back, but pleased. Well send it in for repairs as soon as it gets here.

And so the long lost tuba has made its way back home to Aldine ISD via a journey through Colorado, Oklahoma and Texas by chance, coincidence and a Good Samaritan. The tuba will be used by current and future Teague Middle School band students, and will bring years of musical enjoyment to all. It will have a restricted travel schedule, however, allowed to journey only where the Teague band plays.