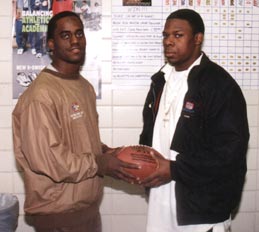 Dondtray Thomas and Ty Stewart had no trouble sharing the offensive workload for the Nimitz High Cougars this year, and as it turned out, their unselfish attitudes were rewarded in a big way during and after the 2001 season.

Thomas and Stewart both rushed for more than 1,000 yards in helping lead Nimitz to a 9-3 season and a trip to the playoffs for the second straight year. For their efforts, the dynamic duo was named the Northeast News Co-Offensive Players of the Year.

It marked the second time two Nimitz High players have shared the award. In 1999, Quentin Griffin and Craig Harris were the News Co-Offensive Players of the Year.

Stewart was the third-leading rusher in District 21-SA from his fullback position, finishing the year with 1,133 yards on 215 carries (a 7.71 yard per carry average). He scored 14 touchdowns for Randy Rowes Cougars, who finished in second place in the district and advanced to the second round of the Class 5A Division II playoffs. Thomas, the starting tailback, chipped with 930 yards on 97 carries (a league-best 9.59 yard per carry average) and scored 10 touchdowns. Between them, Thomas and Stewart accounted for 2,063 yards and 24 touchdowns. Thats a lot of offensive production at any level of football.

Both players admitted they set a goal of rushing for more than 1,000 yards before the season began, but they made it clear they were more pleased with the teams success this past season than their own.
It was a great season because we went to the playoffs, Thomas said. We wish we could have gone a little farther, but it was still a good season. I was happy with my season, but more happy for the team.

and football program really well. They are part of our HERO program (its a program whereby male and female Nimitz athletes visit Aldine ISD elementary and intermediate schools to talk to students about the importance of staying in school and succeeding academically) and they have been very well received by the districts younger students. We are really going to miss them next year. They will be hard to replace.

Rowe said that while the two are close in size, they have different running styles. The fullback is the featured back in Nimitzs Slot T offense, which means he has to be powerful enough to run up the middle, but quick enough to run the trap.

The fullback is our go to guy and we ask him to be quick and strong, which Ty is, Rowe said. You have to have a special runner to run our trap and Ty was that type of back. Dondtray played tailback for us and he had the speed that was needed to get out on the power sweep. He looked a lot like Emmitt Smith running that sweep. Hed get behind the pulling guard and because of his size, hed kid of get lost behind those big linemen. We called him Warrior because when we had to have it (a big run), he was the guy we went to. They both did a wonderful job all year and their running back coach, Rodney Young, did a great job of coaching both of them this year.

As Rowe said, both players displayed excellent leadership skills during the year, but they did not get their points across with words, but rather, deeds.

Both led by example, Rowe said. They worked hard in practice and never took plays off. I think that was important for our young kids to see. You couldnt keep Dondtray out of practice. There were days when the trainer said he should sit out, but hed be out there working as hard as anyone. Both are quiet leaders and they both came to the forefront this year when we needed them the most.