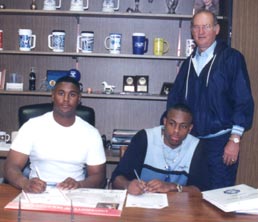 The AISD seniors accepted scholarships to schools all over the country, from Minnesota to Texas.

This is a special group of young men who have worked hard to reach this milestone in their lives, Nimitz head coach Randy Rowe said to the audience, which included the players parents and underclassmen.

Rowe then directed his remarks to the sophomore and junior athletes in the audience about the sacrifices the 10 individuals on the stage made to reach this day.

What these guys have done is they have paid the price and earned it (the scholarships) in the classroom, Rowe said. Football is a fun game to play, but were here to get an education. The first thing college coaches ask about you guys has nothing to do with how many yards you gained, how big you are or how fast you are. They want to know about your test scores and grades. These men paid the price and now they are going to college to further their education and to better their lives.

Eisenhower High School had three players sign on Wednesday. Head coach Richard Carson also held a signing ceremony for the players families and added he was proud of what the three had accomplished during their four years in the football program.

Were proud of these young men, he said. The best thing about this group is that they come from great families. I want to commend you (their parents) for the job youve done with these young men. I know theyll make us proud.

Carson then presented the three, quarterback Ricky Murphy, and defensive ends Reginald Kelly and Brandon Perkins, with a challenge.

You guys are going to places where we really havent sent guys before, so Im putting pressure on you to be our ambassadors so these three schools come back here in the future.

Murphy signed with Southwest Texas State, while Kelly signed with Sam Houston State University and Perkins inked with the U. of Kansas.

Aldine High head coach Bill Smith said he was happy for his two players and the opportunity they have before them.

This is a big day in these two young mens lives and for their families, said Smith, a graduate of the University of Houston. I wish them well and I hope they realize the great opportunity they now have, to earn a college education. Thats the most important thing.

MacArthur High School head coach Terry Forga said he did not have any players sign on Feb. 6. He is hoping to have a couple of players sign at a later date.