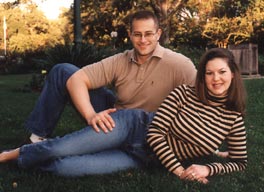 Mr. and Mrs. Charles Youngblood of Spring, Texas are pleased to announce the engagement of their daughter, Angela Janee Graham to Richard Cameron Armstrong, son of Mr. and Mrs. Richard Armstrong.
Angela is a 1992 graduate of Spring High School and received a Bachelor of Business Administration degree in 1996 from Sam Houston State University. She currently works for Reliant Resources as an Executive Secretary.

Rich is a 1992 graduate of Mayde Creek High School and received a Bachelors degree in Finance from Texas A&M University in 1996. He currently works as a Financial Analyst for Suntory Water Group.
Angela and Rich will be married May 4th, 2002 at the Courtyard on St. James Place.