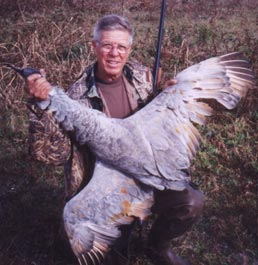 I was excited about the prospects of my first official sandhill crane hunt. Although I have seen hundreds of the graceful birds fly over during numerous duck and goose hunts, I had never had the opportunity to hunt specifically for them during the short winter season.

My lucky moment came when I was on a successful duck hunt back in December with Mike Whalen, an experienced guide and operator of the Porter Creek Hunting Club near El Campo (979-543-9205 or 512-357-6117). We were camped out on a small levee on the edge of a marsh pond on the Garwood Prairie. Our small group was popping away at swarming ducks that had come to Mikes calls and wanted a closer look at our decoy spread.

During breaks in dropping pintails and gadwalls, we noticed numerous large flights of stately sandhill cranes winging their way overhead. Although the season was not open, the sight of the big birds flying across a colorful sky at sunrise only added to the excitement of our morning duck hunt.

After the hunt, we were still seeing large flights of cranes overhead as we rode back to the hunting lodge. Weve got a lot of sandhill cranes this year, Mike said. Why dont you come back down here after the season opens and we will put together a crane hunt?

Not being one to turn down a chance for an exciting new adventure, I quickly accepted his invitation. The sandhill crane season is a small window of opportunity running from the last few days of December to the last part of January. Before we left Porter Creek after our hunt, writer and TV producer Jim Darnell of San Marcos agreed to join us for a return trip in quest of the sandhill crane.

The sandhill crane is an unusual species of game bird. With their long necks, gangly legs, and giant wingspan of over 6, they are set apart from other species by looks alone. Their coloration consists of varying shades of gray with touches of rust on their wings.

The most unusual marking of the sandhill crane is the distinctive dark red patch on top of the head.
The sandhills migration, nesting habits, and grubbing for food with their long beaks are characteristics similar to those of wild geese. However, sandhills are not considered a waterfowl. Each year, millions of the birds gather along the Platte River Basin in northern Nebraska before their long journey south down the Central Flyway in search of warmer climates and the feeding fields on our coastal plains. Hundreds of thousands of big flocks arrive on our Texas prairies during the late fall months.

On my return trip to Porter Creek, I arrived at the hunting lodge just behind Jim Darnell for our planned hunt. The lodge itself is a stately, two-story farmhouse built around the turn of the century that made a perfect conversion into a comfortable hunting lodge. One thing I anticipated almost as much as our hunt was some more of the superb Cajun cooking served up by Lloyd Richard, the camp manager and head chef. Lloyd is from Abbeville, Louisiana, and has had many years of experience serving hungry hunters in numerous hunting lodges. Needless to say, I was not disappointed.

The next morning after a hearty breakfast, we rolled out to the hunting fields. We set our crane decoys and built makeshift brush blinds a few yards away. As we worked in the cool, brisk pre-dawn, brilliant streaks of pinks and purple started showing hunting fields.

These birds dont fly too early, but they should be coming in over that tree line in front of us any time now, Whalen announced. Ive been scouting this field, and there has been a lot of sandhills coming in here in the mornings.

True to his prediction, a large flock of cranes appeared low over the treetops and winged in our direction. They had spotted our decoy spread. Cupping their giant wings, the birds glided in towards us. With their huge silhouettes and the chorus of warbling, ancient sounding calls, the big birds looked almost prehistoric. Im sure there has been little change in the sandhill crane in the last several thousand years.

With Mikes command to Take em! shotguns blazed! Two of the big birds crumpled and angled to the ground. The loads of Estate Cartridge steel BBs had done their job.

With the legal limit of two birds per hunter, we managed to bring down our share of cranes during our hunt. The best part of the morning was watching hundreds of the sandhills flocking into our field on cupped wings across a brilliant and brisk January sky.

If you are new to sandhill crane hunting, you might be asking yourself what to do with a crane once you have dropped it out of the sky. Well, Ive heard them called flying T-bones. Mike affectionately calls them the ribeye of the sky.

The next step in my sandhill crane adventure is to try one of the medium rare breast steaks on the grill.