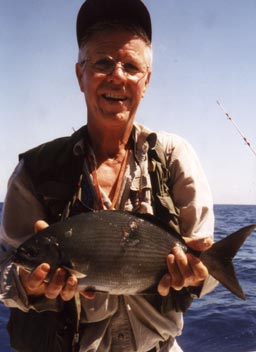 A few months ago, I told you about an offshore fishing adventure out of the island town of Port Aransas. Until recently, I had been unaware that our group had been a small part of coastal fishing history on that trip.

We had motored out of the harbor just after dawn on a bright fall morning and headed into the Gulf. The 42 Hatteras named the Freespool rumbled through rolling seas into the blue-black waters and into a brilliant sunrise. Our original plan was to fish for the large schools of hard-fighting blackfin tuna that migrate into that part of the Gulf during the fall.

Before we left the dock, our boats captain had informed us that the tuna had not arrived yet and their migration was running later than usual. He also told us there were numerous other species of fish in the Gulf during this mild time of the year. He added that we might have to venture a little farther into the Gulf to find them.

We stopped and checked out offshore rigs and anchored shrimp boats, tossing over scoops of chum along the way. We were almost sixty miles into the Gulf before we found the fish. We finally located a concentration of fish near a big oil platform. We dropped lines around the base of the large legs supporting the rig. We started getting immediate hook-ups on sow-size red snapper in the 16-20 lb. range.

In the meantime, I had cast a Spanish sardine drift bait behind the stern. The bait drifted with the current until my rod lurched forward from a vicious strike. After a valiant fight, I was able to bring a powerfully built amberjack to the gaff. With its sleek body and distinct markings, it was a grand fish.

After the fishing slowed a bit, the decision was made to motor a few miles farther into the Gulf. Our destination was a cluster of giant offshore rigs anchored in about 200 of water. These are usually fish havens sitting in the middle of the open Gulf where numerous species of sports fish gather and feed in and around the protection of the big offshore structures.

In addition to the big red snapper we continued to catch, we caught the first of several sizeable silver and black barracuda. These big, toothy fish are ferocious feeders and prefer the deeper waters of the Gulf. Members of our group took turns testing the lines and drags as well as their backs and shoulders while fighting some of these strong fish.

While I was trying to recuperate with a cold drink from a long and hard-fought battle with a much younger and exceptionally large barracuda, I saw fellow outdoor writer Jim Darnell uncasing his fly rod.

Over the years, Jim and I have shared numerous bird hunts, fishing trips, and duck blinds together. I have always known that Jim is an avid fan of fly fishing. Im going up on the bow and have some fun with my fly rod, he said with a big grin.

The offshore Gulf is not the place for the faint hearted to fish with timid tackle. There are a lot of monster fish that cruise the deep waters of the Gulf. It is not a place that many people think of taking thin longrods and light line to catch fish, but Jim couldnt resist the challenge.

We had seen the huge schools of Bermuda chub in the clear surface waters around our boat. The Bermuda chub like the deep waters of the Gulf and like to feed around offshore structures. They are a thick, stocky built fish that is shaped like a freshwater perch on steroids. They travel in large schools as they rise from the deep water to feed on the surface and disappear back into the depths.

The first couple of fish Jim hooked overpowered his tackle or got into the barnacle-encrusted legs of the rig and broke off. Suddenly, Jims G Loomis 8 weight rod went into a deep arch. After a few tense minutes and several trips around the bow of the boat, Jim was able to keep the fish out of the legs of the rig. We saw the big chub surface and could tell it was an exceptional fish.

The tiny fly hook on the 8 weight line on the end of the 12 lb. leader tippet held as he brought the exhausted fish to the surface. Our boat captain made a perfect stab with the gaff to land Jims fish.

On the long boat ride back to the harbor, we discussed the fishs size. Jim decided to take it to the Texas Parks and Wildlife office in Rockport. After officials there measured and weighed the chub, Jims fish was certified as the new Texas state record. The existing state record was about 1 1/2 lbs., and Darnells fish tipped the scales at 4 lbs. 1 oz.

Jims Bermuda chub didnt just break the state record; it shattered it! It will probably remain the Texas state fly rod record for some years to come.