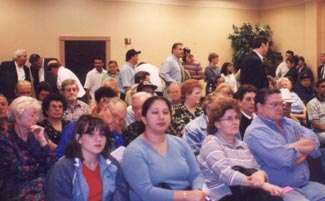 On Monday, January 28, the Texas Natural Resource Conservation Commission (TNRCC) held a public meeting at the Holiday Inn Intercontinental, 15222 JFK Boulevard, to hear comments on the application of Ameritech Environmental, Inc. for a registration to construct and operate a Type V medical waste transfer station.

Ameritech Environmental, Inc. has been operating as a medical waste transport service from their company headquarters on Interdrive East, just south of Aldine Bender for approximately 1 year.

Each day, Ameritech trucks leave the facility and travel throughout Houston and the Gulf coast area collecting medical waste from doctors and dentists offices, hospitals, clinics and other health care providers. In addition, Ameritech collects waste from ships docking along the Gulf coast that because of its foreign origin must be disposed of in an environmentally safe manner.

Under current procedures, the collection trucks return at the end of their routes to the Interdrive facility where a new driver is brought on board to drive the collected waste to Center, Texas where it is incinerated.

Ameritechs application, if approved, would allow them to transfer the contents from a number of smaller trucks into one large tractor-trailer for the trip to Center. Regulations allow a transporter of medical waste 72 hours in which to deliver it to its final destination; partially loaded trailers will remain at the facility until they are filled.

Approximately 100 area residents attended the meeting and many, if not most came prepared to oppose the TNRCCs approval of the application. They expressed often heatedly, a number of concerns about the operation of a transfer station so close to a residential area.

The closest neighborhood to the facility, Aldine Place, is just east, across Greens Bayou. Most of the subdivision suffered significant flooding as a result of Tropical Storm Allison in June and a number of its residents expressed fear that a similar flood would release hazardous substances into the waters of the bayou and eventually into the ground water.

Jonathan Howard, Ameritech President, responded that their location had only about 3 inches of water inside during the flooding and that there was never any danger of that happening. In the event of even more serious flooding, the company would immediately move the trailers toCenter. With the assistance of Vice President Charles Gilman and Laurie Erwin, he outlined the safety procedures that would be in place to handle any accidental spillage. Mr. Gilman displayed the containers used to transport the waste, 3 mil. red biohazard bags, inside of sealed cardboard containers and plastic drums. He explained that the containers would be transferred from the small trucks to the trailer in a concrete lined and walled, covered bunker. The trailers will be locked, parked in an area under camera surveillance and on-site security.

The protesters were not mollified.

After a short recess, more public comment, including the reading of letters of opposition from both State Representative Kevin Bailey and Congressman Gene Green were heard.

The representative from TNRCC in charge of the meeting, explained that the agency cannot consider community opposition as a factor in making their decision. If Ameritech completes the application process and meets all the requirements, it will be approved.