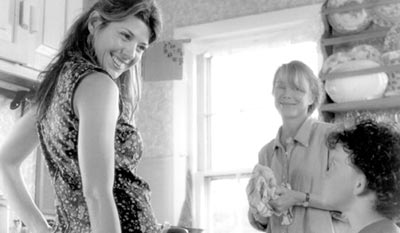 By the time you read this, the Oscars of 2002 will be history. On the Thursday before Sundays big event speculation about who will take home an Academy Award are rampant and most of the nominees have hit the talk show circuit.

So, who will win? Who cares? I do. Thats why I sit down for the eighth year in a row to try to figure out what that crazy Academy will do. Ill also toss in who I think should walk away with a little gold bald guy  even though I am not nearly as qualified as Ive been in the past since I didnt see as many movies last year as I usually do.

Unlike the big show, Ill get right to the most important category. I did see all of these and each one is quite entertaining and memorable, but which one is Best?

I think its between Beautiful Mind and In the Bedroom with The Lord of the Rings close behind. Yet, those who just adore Moulin Rouge seem to have gained some momentum in the last few weeks. Ill be shocked if Gosford Park gets the big award. But it would not be the first time I was surprised during the Academy Awards.

Robert Altman, the director of Gosford Park taking home an Oscar in the directing category would not surprise me because the Academy might just want to honor him for past efforts with an award this year. If this happens it could mean Bedroom or Moulin, might win best pic since neither ones director got nominated.

If its to be Beautiful, its director Ron Howard should win. The same for Peter Jackson and his Lord. It only makes sense that the best picture also has the best director, but this does not always happen.

David Lynch (Mulholland Drive) and Ridley Scott (Black Hawk Down) have no chance of winning in this category since their movies were virtually ignored in every other.

New this year is the best animated feature film. Shrek is the clear winner. No contest. Monsters, Inc. is a terrific kids film, but Shrek is good enough that it could of, should of, been in the main category.

The acting categories are tough this year. It would help if Id seen all the performances, butHalle Berry is the unknown for me here. Ive only heard good things about Monsters Ball. Apparently, Berrys outstanding and has a real chance at the Oscar.

On the other hand, Im sure Rene Zellweger will just have to be content with her nomination for Bridget Jones Diary. Shes a fine actress, but not this time. Theres little buzz around Judi Dench, who is so good its painful to watch her in Iris. Nicole Kidman and the Moulin Rouge camp cant be counted out. She has talent, but I still think her beauty outshines her skills.

If it were my choice, Sissy Spacek would win for In the Bedroom. Actually, as much as I like A Beautiful Mind Id be happy if In the Bedroom swept its categories. Actor nominee, Tom Wilkinson and Spacek are perfect as grieving parents in the movie. They say so much, often times without saying a word.

But the real contest is probably between Denzel Washington and Russell Crowe for best actor. Washington is amazing in Training Day, just a so-so movie.

I cant think of a recent actor playing a more evil character and still getting a nomination besides Anthony Hopkins as Hannibal Lector. He won. Plus, Washington has been terrific in so many roles. Remember many  me included  thought hed best Crowes Gladiator last year with his perf in Hurricane. Crowe went home with the gold, but the Academy often tries to make amends for its past choices.

In Beautiful Mind Crowe again loses himself in a role. Its possible he could be the third actor, behind Spencer Tracy and Tom Hanks, to win best actor Oscars back to back.

Sean Penn is a wonderful actor, but I dont think he should have been nominated for his overblown performance in I Am Sam. Like many people, I missed Will Smith as Ali. My Mom said he did a really good job, but theres little buzz on him.
The supporting acting categories are always hard to pick. I only caught three of the actors performances, missing Jon Voight in Ali and Ben Kingsley in Sexy Beast. Jim Broadbent for Iris is a good bet because of his strong work in Moulin Rouge, Bridget Jones Diary, Topsy Turvy, The Borrowers and many others in recent years.

For the same reason the stellar Ian McKellen could win for his role in The Lord of the Rings and his solid performances in the past. The younger you are the harder it is to win because of past work, but if history is anything to go by youth has its advantages in this category. Ethan Hawke is far better than hes ever been in Training Days so he might have a chance

Supporting actress is the toughest category this year. Cant they all win? The weakest link here is still so strong and the one most likely to win; Jennifer Connelly for Beautiful. Helen Mirren and Maggie Smith, both in Gosford Park, will probably cancel each other out. Id consider Kate Winslet (Iris) as a lead character. Id give all my votes to Bedroom so Marisa Tomei would get my nod.

Ill save us all and skip the other nominations. But Id like to say Memento deserves to win in its writing category since it was one of the best movies of the year and it was virtually ignored by the Academy.