Putting the Finishing Touches on a New Fishing Boat 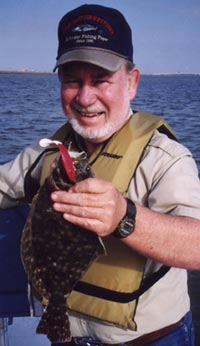 It was still February and a day before Old Man Winter was scheduled to unleash his last blast on our coast with freezing temperatures. The weather outside my window was acting like spring with its balmy warmth and sun-filled skies. It was hard to concentrate on indoor work.

The phones ringing jarred me back to reality. Lets go fishing! blurted the voice over the phone. It was hunting and fishing buddy Bark Elliot on the other end of the line with what I was sure was a devious, middle-of-the-week scheme.

Ive got a terrible case of cabin fever, I told him. In fact, it could be terminal unless I do something about it soon.

Lets go down to the bay tomorrow afternoon and try to catch some fish before this cold front hits, Berk rationalized. It should be a prime time. I need to put a fish in my new boat.

An approaching cold front can launch fish into an active feeding period because of barometric pressure and tide changes, At least, that is what folks that know about such things tell me. Going fishing sounded like a logical plan to me. Besides, I was ready for an escape to the water.

Berk had ordered a new boat several months ago. The last few times on the water, he had spent most of his time breaking in the engine. Although he had managed to throw a few lures on these trips, he had not christened his boat with any fish. This exercise only helped to fuel his fishing fever.

Elliots new boat was a sleek little 16 center console Carolina Skiff with a quiet running, 4-stroke Yamaha engine. He had it rigged out specifically for fishing our shallow bays, jetties, and shorelines along the Texas coast. With a powerful thrust trolling motor, rod holders, bow deck casting chair, and modem electronics such as a depth finder and GPS system, the boat was rigged out with all the extras to make it the perfect bay fishing machine.

By the time we arrived on the water the next afternoon, the spring-like weather was still holding. The air had cooled only slightly and the westerly breeze was putting a few ripples across the bay.

Having decided to fish Jones Lake, we would launch the boat at Louis Bait Camp. A short run down a winding channel put us into the main part of the lake. Jones Lake is actually a shallow bay dotted with shell bars, grass islands, and grassy shorelines. The small bay is actually the backwater of sprawling upper West Bay north of the Intercoastal Waterway in the Greens Cut area.

While we were launching the boat, I told Berk, You know this thing is going to run a lot better after we put a few fish scales in it. He readily agreed.
Since I had never fished Jones Lake before, I relied on Berks knowledge of the area gained from his past fishing trips there.

I have caught a lot of fish out of this little bay, but it is so shallow you really have to know where youre going, especially on a low tide, he informed me. Not a lot of people fish it because they dont know their way around. Im still learning.

We made a couple of drifts past an exposed shell bar using top water baits. They looked good chugging across the top of the green water, but I guess the fish were not impressed Nothing!

When we decided to change locations, I quickly switched to a long, lime-green plastic tail. On the first few casts into a small lick I got a couple of vicious strikes. However, the fish failed to hook themselves. After examining my bait, my suspicions were confirmed. The mystery fish had left teeth marks and slashes just below the hook.

I think these are flounder feeding in here, and they are striking short, I told Berk.

After seeing the action on my plastic bait, Berk busily rummaged through his stash of lures to find the right soft plastic tail. He tied on strawberry and white Berkley Power Bait and quickly began casting.

In my own tackle I found a stubby and colorful worm-like lure with an added treble hook embedded in the end of the tail. I tied it on and waggled it in the air in Berks direction, This will fix em, I said, pointing out the hook in the short tail.
We were using a sea anchor and drifting a grassy shoreline, casting into a small feeding slick when Berks light rod buckled. Im on he said excitedly. It feels like a flounder.

I managed to land several of the short-striking flounder with my little lure with the hook in the end of the tail. Each fish had the small hook pinned in the corner of its mouth.

Even a scrappy redfish fell for the little lure with the same results. The way he fought and ran around the boat, no one had told the juvenile redfish he was just under the legal 20 size. I released him back into the green waters of the bay.
The setting sun was still sending glistening trails of gold across the bay, but the temperature was dropping.

We could see the ugly dark bank of clouds from the approaching front and decided we needed to head for the safer waters of the channel.

As we wound our way back through the shallow channel with several flounder arid redfish in the bottom of the boat, the sounds of the little Yamaha engine purred a little smoother. I knew it would once it was christened.