The Sweetest Thing not sugar coated 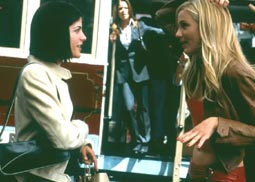 The Sweetest Thing is a hard movie to review.
The plot is as thin as the paper youre reading, the pacing and tone are erratic and the likable cast is good looking but they all try too hard. Normally these negatives would add up to a bad review, but a lot can be forgiven when a movie is funny.

The Sweetest Thing is very funny. It is rude, crude and disgusting humor in the vein of Theres Something About Mary and American Pie, but without the depth of those movies.

Anybody familiar with those films knows that neither is known for its deep insight into the human psyche.

One should not go to The Sweetest Thing with great expectations and dont go at all if you are easily offended by the idea of three twenty something girls looking more for a good time and sex than for love.

Christina (Cameron Diaz) thinks that love makes you vulnerable so its better just to string men along for as long as you need them. Her friend Courtney (Christina Applegate) agrees, but Jane (Selma Blair) is less agreeable since shes broken hearted after a recent split.

While trying to cheer Jane up at a favorite club, Christina meets Peter (Thomas Jane) a cutie who intrigues her with his witty ways. Jane and Courtney soon hook up with guys too, but Christina and Peter soon go their separate ways  unlike the other two girls new boy toys.

They destroy a bathroom and distract a biker so much he crashes. Oh, and Christina almost gets her eye poked out.

Diaz, best known for her role in Theres Something About Mary, is not as sweet or as fresh as she was in that movie. The Sweetest Thing is definitely trying to borrow from the Farrelly brothers movie, but theres not enough material to compete. Theres a reference to their Dumb & Dumber in a scene that has nothing to do with the rest of the film.

Sweetest doesnt have enough material to fill up its less than 90 minutes so it contains fillers like the scene where Christina and Courtney are trying on clothes and decide to have a movie montage where they dress like characters from different films. Along with being impossible  their hair alone would take hours to change, to say nothing of makeup  its irrelevant and goes on so long its no longer fun.

Besides not being as good as she has been in the past, Diaz looks kind of strange. I dont know if shes lost too much weight or had too much work done. Its Applegate who shines in Sweetest, shes cuter and funnier.

Jane was recently in 61* on HBO and he first caught my attention in Deep Blue Sea. Hes a charmer with leading man potential.