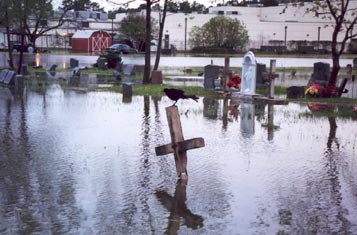 In the early morning hours of last Monday, the sky opened up and dumped approximately 4 inches of rain on the city of Houston.

While most of the city experienced little more than the occasional ponding at intersections, businesses and residences along Luthe Road, Reeveston, Chrisman and Sweeney, west of Hardy, suffered significant flooding.

Hardest hit, was the Morales Cemetery at Luthe and Buschong.

Charles M. Wilcox, Manager of Engineering in Precinct One, responded to questions about plans to address the problem.

He said that the project is moving ahead and that studies are now underway to be sure that the work done to alleviate flooding in this area does not cause flooding downstream.

This must be done before the Harris County Flood Control District will sign off on the project and construction can begin.

The project has been expanded to include Luthe, Reeveston and Chrisman and while Mr. Wilcox declined to give estimate of when the work will get underway, he said that he hoped that it would start within the next six months.