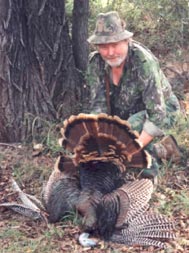 When the sun rises this coming Saturday morning, it will shine on thousands of avid wild turkey hunters trying to call a long bearded gobbler into range. Across much of Texas, it is the long held tradition of the opening of spring turkey season.

There is something a little magical about being in the spring woods at dawn. With all of its colorful sights and sounds and smells, spring is a time of awakening. It is a time of renewal to remind us that another winter has passed and the plants and wild creatures are evolving out of a more dormant state. There are few things in nature more exciting and beautiful than to watch a strutting gobbler waltz through a field of wild flowers and cactus in full bloom with pink and yellow blossoms. With his brilliant red head and his jet black and iridescent bronze plumage glistening in the morning sunlight, he becomes the centerpiece of an ultimate picture of natures beauty.

While the taking of a wild trophy gobbler can be the ultimate climax of the hunt, it is often an anti-climactic part of the spring turkey hunting ritual. Hunting the wild Texas turkey is becoming a popular tradition. For many years before Texas Parks and Wildlife reinstated the spring season, it was a common practice to take turkeys during the fall when flocks happened to pass near deer stands or come to a game feeder. Few sportsmen hunted specifically for them, but they were a bonus for the deer hunter.

The spring hunting season, established in the mid-1970s, set aside a gobblers-only hunting during the breeding cycle when the males are most susceptible to calling. Although there are still a lot of turkeys taken in the fall, it is the excitement of calling in the big birds that draws the 100,000 spring turkey hunters.

Texas is home to about 600,000 of the wild birds, a number which is larger than that of any other state. After a restocking effort over the years, there are sizeable numbers of the Eastern turkey in many of the counties in the east and southeast parts of the state. The biggest turkey population in the state, however, is the Rio Grande. The Rio Grande species is slightly smaller, but are more adaptable to a harsh habitat. The Rio Grande thrives across the state and especially in the rugged regions of South Texas and the Hill Country. These wild birds are not to be confused with the big breasted and tiny-brained domestic birds we pick up at the local supermarket just before Thanksgiving. The wild variety is extremely smart with superior eyesight and hearing.

The first challenge to hunting the wild turkey is to locate the birds. This is a little more difficult if you are on an unfamiliar ranch or hunting lease. Over the years most of my turkey hunts have been for the Rio Grande species in the areas around Rock Springs, Bracketville, Uvalde, Camp Wood, and Junction. Although I have taken gobblers in all these areas, I have had to work a little harder at hunting some than others. Calling in a love-struck gobbler can be the ultimate challenge and the pinnacle of hunting experiences.

The best way to locate a gobbler is to hear him, either on the roost at dawn or dusk, or on the ground during the day. For this reason, the best strategy is to scout the hunting area and find the roosts.

Locating roosting areas can be fairly easy in much of Texas turkey habitat. Find a stand of big trees, especially those near water, and you will usually find turkeys.

Generally in Rio Grande turkey country, roost sites are predictable. Some individual trees on ranches have served as turkey roosts for decades and are usually well known to hunters on the lease.

One of the largest and oldest turkey roosts in the state is in a stand of giant trees in the WalterBuck Henry State Park along the South Llano River southwest of Junction. Flocks of wild turkey have been roosting in those same trees for over 100 years.

I was able to turkey hunt on the property just across the river from the park. I could hear the flocks coming down off the roost in the mornings. I also watched as the turkeys would make their way back to their roost in the evening. Occasionally, I could get one to come within range of my stand.

Hopefully, one bright spring dawn in early April will find me hunkered down by a big tree in the Hill county, watching and listening for a strutting Rio Grande gobbler.