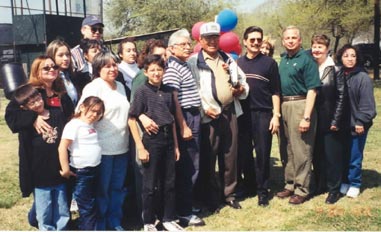 The North Houston American Little League kicked off opening day on March 23 with a parade, a cake auction, an appearance by Congressman Gene Green and plenty of barbecue and activities for young and old.

Green, a longtime area resident and five-term U.S. Congressman for the 29th district, was on hand to help honor 79-year-old Florentino Contreras for his 35 years of volunteering work with the North Houston American Little League. Contreras also received a plaque from the league.

Because of health problems, this opening marks the first time in decades that Contreras will not be a coach for the Little Leaguers in North Houston.
His health has improved some recently so maybe next year the man they call Mr. C will be back
sharing his philosophy of working together.

Green sponsors a team of 9-year-olds who were district All Stars last season. The Congressman also gave the league a new flag for the new season.

For most of the hundreds of kids who attended the opening day festivities Greens honoring of Contreras was just background noise. There were too many other distractions on hand. One field was full of amusement rides, a jousting game, a moonwalk, super slide and wall climbing. Also present was the Metro Discover Bus and a fire truck so kids could experience what its like to climb the ladder.

The parade to start the day had 62 floats.
There was a good turnout, said League President Steve Adame, who hopes for an even better parade next year.

When asked how the recent fire at the field affected opening day, Adame was pleased to say the only set-back was in burned tents and a gentleman, who wishes to remain anonymous, generously donated replacements.