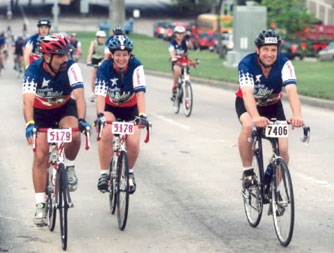 When ExxonMobil employee Mary Wiens rode tandem with her husband in the MS 150 in 1993 she never dreamed how close and personal she would be to the disease for which she and so many others have ridden.

It was the hardest thing I had ever done, Wiens said, until I was diagnosed with MS in 1997.
For Wiens and so many others battling multiple sclerosis (MS), the news can be devastating, especially at first when the disease and its effects are unknown. But as Wiens discovered, the news gets better.

The more you find out, the more hopeful you become, said Wiens. And the MS 150 is such a valuable tool not only for fundraising but also for educating and generating awareness of this disease.

Since 1985, riders from all over Houston have hopped on their bikes and pedaled through the more than 150 miles from Houston to Austin, testing their endurance and strength in a way that is similar to those who battle MS everyday. And it doesnt stop there.

Aside from the physical feat of biking for two days throughout the oftentimes-hilly, Texas roads, riders who participate in the MS 150 generate awareness and much-needed dollars that go toward the fight against MS.

Companies like ExxonMobil, for which Wiens works, encourage employee participation – thereby creating awareness and raising money for MS – by sponsoring their employees and their families and friends.

ExxonMobil provides its nearly 300 riders with organized training, jerseys, safety items, food and tents for the night in LaGrange, Texas. In addition to that, the company matches employee hours accumulated during the ride with grants that fall under the foundation s Volunteer Involvement Program.

Its the support of companies like ExxonMobil that has helped increase not only the number of riders, but also the sizeable increase in dollars raised for research, education, community programs and direct services for those battling MS. And each year the numbers keep growing.

ExxonMobil spouses, children, parents and friends can all join the team and raise money. For example, Wiens husband, Steve, is among the top 300 fundraisers for the MS 150 and has raised more than $9,000 this year that will go toward ExxonMobils team goal.

Its difficult to put a hard number on the positive effects of the MS 150 Bike Tour, said Kelli Boltz, Director, TeamMS for the National Multiple Sclerosis Society Lone Star Chapter. Its a pledge event so each participant is out there in the community, asking for money. In doing so, they make people aware of this event and what its about.

And according to Wiens, its the success of the event and what it means for people, as well as the support of her company, that keeps her optimistic.
We are making advances all the time because of the research resulting from the MS 150, said Wiens. But its especially heartwarming to work for such a great company that cares for its employees.
The MS 150 is a two-day non-competitive cycling adventure that challenges riders of all age levels and abilities. The purpose of the tour is to raise money to fight the devastating effects of multiple sclerosis and increase awareness of MS symptoms and the important new treatments now available. As the largest MS 150 Bike Tour in North America, the BP MS 150 Houston to Austin attracts more than 10,000 cyclists and 3,000 volunteers.

Supporting the MS 150 and its employee riders is just one of the many ways ExxonMobil is involved with community service. The ExxonMobil family has a long history of supporting community groups and educational organizations in the greater Houston area, not only with contributions and grants to targeted organizations, but with thousands of employees and retirees who volunteer their time and talent to local non-profits.