The Sharks of Summer 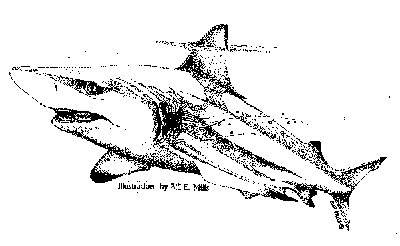 This frantic warning is enough to strike fear into the heart of any wade fisherman or anyone else, for that matter, who happens to be waist deep in the salt water.

Sharks have fascinated and frightened coastal anglers for centuries. They bring out a mixture of fear and excitement in most of us. These mysterious creatures are the stuff that folklore and legends are made of. Early ocean adventurers and ancient seafaring maps depicted them as menacing sea monsters of the deep. Anyone who has ever watched a several hundred pound, toothy, gray fin express slash a trophy size kingfish in half with one vicious bite might tend to agree.

However, on the Texas coast, the shark has a somewhat undeserved bad reputation as a prowling, man-eating killer. Over the last 40 years between 1961 and 2001, there have only been 15 recorded shark attacks in Texas coastal waters, according to Texas Parks and Wildlife Department statistics. Only two of the attacks resulted in death; both were from severe bleeding. Experts agree that most of these attacks have been a case of mistaken identity where the shark sees the splashing arm or leg of the fisherman or swimmer and identifies it as something it is accustomed to eating.

During the late spring and early summer, warming tides and temperatures bring a variety of sharks into our closer coastal waters. These same warm temperatures lure more fishermen and swimmers into the same waters, creating an up close and personal contact with the sharks.

These magnificent creatures are vastly misunderstood. Not only does the shark play a critical role in our vast marine ecosystem but it also frequently provides a few encounters on the opposite end of a fishing line that can be the highlight of a memorable fishing trip. In warm coastal waters, sharks of all sizes are literally everywhere. They prowl the shallow waters of the back bays, they feed along the sand bars in the surf, and they roam the deep drop-offs in the blue waters of the Gulf.

In the worlds bays and oceans, there are over 250 species of sharks. Many of these species are found in our Texas coastal waters. Water temperature is one of the most important factors concerning the movement of sharks. Deep-water species such as the mako, the bull shark, and most of the time the great hammerhead can be found year-round in the warm, open waters of the Gulf of Mexico. These creatures will migrate along the jetty systems, in the surf, and even within the Texas bays, depending on the rise and fall of the thermometer and the movement of baitfish. During these warming trends, the popular, shallow-water blacktip and sand sharks will move into the bays and surf.

Without exception, all sharks lack a true bone structure. Their skeletal support is made of cartilage, and the skin is made up of placoied scales. The abrasive hide of the shark is rough enough to cut through some of the strongest monofilament line. If you have ever owned a pair of almost indestructible sharkskin boots, you understand how tough this scaly hide can be.

The abrasive hide is not the only thing that can cut your fishing line. The sharks mouth is lined with rows of razor-sharp teeth. Through their lifetime, sharks shed their teeth and generate new ones. The bays and beach bottoms are virtually littered with all sizes of shed shark teeth. Many consider the teeth as good luck, and others collect the to adorn necklaces and key chains.

Because even a small shark can easily slice through a heavy monofilament leader, most fishermen anticipating the possibility of an encounter with a shark will rig up with a wire or plastic coated steel leader. Leader length should exceed the length of the shark in the 12-15 range. A sharks thrashing tail can also wreak havoc on a monofilament line. Most anglers fishing specifically for sharks like to use the heavy circle hooks in the 9/0 to 12/0 range designed to hook the fish in the corner of the mouth and not in its throat.

In near offshore waters where a large population of big sharks roams, chumming is the key to bringing cruising sharks to your boat. Sharks possess a most acute sense of smell. The shark can detect the smell of a meal in the water from a great distance away. Oily baits such as chopped pieces of blue fish, menhaden or mullet are ideal chum. Bloody baits like pieces of bonito and jackfish are also great shark chum. The more oil and blood in the bait, the better.

Many times you will find sharks as well as king mackerel working the same chum lines behind anchored shrimp boats culling their by-catch after a night of shrimping.

Oil rigs and platforms in the Gulf are good places to start a chum line, but dont overdo it. Toss just enough chum into the water to create a continuous slick. A small amount of chum can attract big numbers of sharks. Too much chum will cause the sharks to lay back in the current and feed rather than come in close enough to eat a drifted bait.

To really enjoy picking a fight with a shark, lighten up on your tackle. For a medium weight rig with lots of quality line and acres of open Gulf water, a heavyweight shark can create the fight of a lifetime. Almost as memorable will be the boneless shark steaks served hot off the grill.

For me, when someone yells Shark! its an exciting signal to grab the nearest rig with a long wire leader and get ready for a king-size battle with one of the true monsters of the deep.