Men in Black are back! 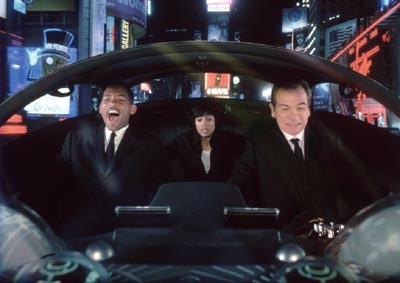 Will Smith is back as Agent Jay, Rosario Dawson is someone in need of help and Tommy Lee Jones is once again Agent Kay in the very funny Men in Black II.

Fans of the Men in Black movie have had to wait five years for its sequel to hit the big screen. Was it worth the wait? Is the second movie as good as the original? Happily, yes and yes!

The original was irreverent, gross, clever and laugh-out-loud funny, so in a world full of supposed comedies with barely an once of humor, it is too bad we had to wait so long for an update on the actions of the men – dressed in black – saving the world from alien scum.

It is quite a feat for a sequel to match the original, but the filmmakers have succeeded with MIIB. Of course, it has been a while since Ive seen the original so my memory is a little fuzzy, but I do remember it being wild and wacky and very funny.

Now we have more. Hooray. Its so much fun to watch a movie thats this delightfully funny. The humor, though not usually subtle or deep, is the type that sticks with you, too. On the long drive home after the movie I was still laughing. And as I write this, Im smiling.

Ill never look at a postal worker in quite the same way. And those worms are such a hoot.
MIIB is not just comical, its also full of action and it has heart. The returning Will Smith (Ali) is Agent Jay. We care about his lonely life fighting bad aliens. From the first movie, we know most aliens are decent enough  and there are many of them amongst us.

Jays extremely good at his job, but he goes through partners pretty quickly. He feels the need to neuralyze them  erase their memories  because they are unhappy or not especially good at their job. His best partner was his first partner, Agent Kay played once again with rough gruff perfection by Tommy Lee Jones (Space Cowboys).

At the end of the first movie, Agent Kay was neuralyzed because he wanted to go back to a normal life – the kind of life where you can have a relationship and actually talk about your job outside of the work.

Being with the secret government organization is a hard and lonely life. Its starting to get to Jay so much that he does not erase the memory of a pretty pizza parlor worker after she witnesses her boss get killed by the evil Serleena played by Lara Flynn Boyle (best known from David Lynchs Twin Peaks).

Serleena is bad news, so bad that its necessary to bring back Kay from his normal job at the post office and try to restore his memory so he can save earth. Jones plays befuddled better than I ever thought he could as Jay tries to explain Kays previous job. Jones and Smith are a one of the great movie comedy teams; they play off each other so well.

The plot is not rocket science, but its so fun I dont want to spoil anything. I can say one of Jays partners is Frank, a talking Pug dog with a love of singing. And Serleena has really gross snake-like appendages that she uses as effective weapons. This might scare some kids, but most everything else is comic book type of violence and frights.

Rip Torn is back as the boss Zed, looking like hes having a smash up time. Rosario Dawson (Kids, He Got Game) is the pizza parlor girl who features prominently in the story.

If you liked the original youll love the second and if you missed the first one youll still love Men in Black II.

Rated-PG-13 for science fiction action, violence and some provocative humor.