Houston Knights play for the love of the game 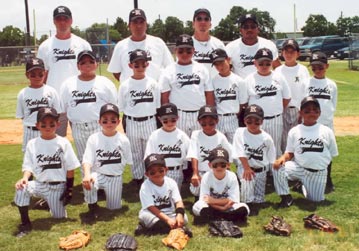 Shown from left to right: Parent Tracy DeLatte, Coach Concepcion Perez, Manager Salomon Hernandez, Coach Jesse Acosta Sr. Players: Nico Sanchez, Noel Alba, Daniel Garcia, Isaac Bustamante, Manuel Hernandez, Carlos Perez, Austin Garney. On one knee: Marco Palacios, Ricky Urbano, Isaac Carreon, Jesse Acosta Jr. Marshall Sanchez and Miguel Perez. Team mascot: Nico Palacios, Bryan Delatte. These kids have shown their tremendous love for the game, Even after baseball season ended, they were looking for a team who would play during the off-seasons. The coaches saw the passion in the players (same passion the coaches have for the game) and they decided to form the team. The Houston Knights have participated in several tournaments were theyve had the opportunity to compete against other great teams AND THEY LOVE ITI The players would like to thank their coaches, parents and all their fans for their support.