Houston – we have a concert! 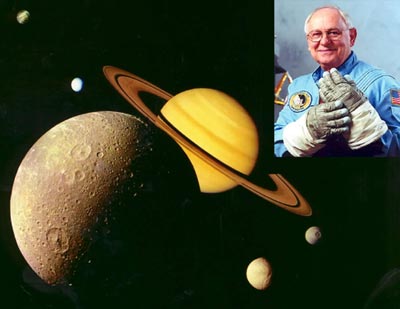 Astronaut Alan Bean, who flew missions on Apollo XII and Skylab II and was the fourth person to walk on the moon, narrates Gustav HoIsts majestic suite The PJanets~ peiformed by the Houston Symphony Aug. 22 at The Cynthia Woods Mitchell Pavilion. The performance, led by Houston Symphony Resident Conductor Mariue~ Smolij, begins at 8 p.m.

This interstellar experience presents the latest images from deep space choreographed to a live performance by the Houston Symphony of Hoists The Planets, Suite for Large Orchestra, Op. 32. Produced in cooperation with the Jet Propulsion Laboratory, guests see spectacular computer animation and dramatic, high-resolution film and photo images from NASAs unmanned spacecraft – Mariner, Viking, Magellan, Voyager and the Hubble Space Telescope. Making the evening even more memorable is that the narrator and tour guide is Alan Bean, a NASA astronaut from the Apollo XII and Skylab II space missions.

During his 18-year career at NASA, Beans service included 59 days in space orbiting 270 miles above Earth. He served as commander of the Skylab II mission and piloted the Lunar Module in the Apollo XII mission. He was awarded two NASA Distinguished Service Medals along with other national and international honors. An accomplished artist whose works depict vivid scenes of space, Bean is a sought-after speaker and has appeared as himself in movies and television.

Composed by HoIst in 1917, The Planets is an orchestral suite of seven movements titled Mars, The Bringer of War, Venus, The Bringer of Peace, Mercury, The Winged Messenger, Jupiter, The Bringer of Jollity, Saturn, The Bringer of Old Age, Uranus, The Magician and Neptune, The Mystic. During the program, the first pictures from the surface of Mars, images of the Martian Mount Olympus, three times higher than Mount Everest, and many other film and photo images from NASAs archives are projected onto a giant screen.

Before the journey through space begins, six exhibits from the Johnson Space Center in Houston are available for viewing. These include the Apollo EMU Spacesuit Mockup, a space shuttle model, Apollo photographs, moon rock replicas, a space shuttle orbiter with a spacelab model, and a panel featuring the solar system. When darkness falls, telescopes provided by The Discovery Channel Store give space enthusiasts a closer look at the wonders of the sky.

The Planets begins at 8 p.m. Aug. 22. Doors open at 6:30. Pre-performance activities are planned for children and adults starting 40 minutes before the show. Kids are invited to a party in the North Plaza with the K-ARTS Jack & Jill Club. The Club is free to all children with a ticket to that days performing arts event. Also in the North Plaza, guests are invited to sit in on Pavilion Talk, a free pre-concert discussion led by noted music scholar and college professor Ira J. Btack that provides guests with insight into the evenings program. Both activities begin at 7:20 p.m. Picnics are welcome in the lawn area for this event; however, beverages cannot be brought into the venue.

Tickets to travel the universe with the Houston Symphony and The Planets are $22, $18 and $15 for reserved; $10 for lawn. Seniors 60 and over can receive a $2.50 discount. Tickets can be purchased at The Pavilion Ticket Office Monday through Friday 10 a.m. – 6 p.m., Saturdays 10 a.m. – 4 p.m., and on event days through intermission. The Ticket Office is located at the north entrance to The Pavilion at 2005 Lake Robbins Drive in The Woodlands. Tickets also are available at all Ticketmaster outlets, including Foleys, Fiesta and Wherehouse Music, can be charged by phone at 713-629-3700, or can be purchased through The Pavilions Web site at paviion.woodlandscenter.org. Most major credit cards are accepted.

On-site, preferred parking is available in the Gold Lot Garage, located off Six Pines Drive. Parking is $5 per vehicle for this and most performing arts events. Tickets for preferred parking can be purchased in advance at all Ticketmaster locations and The Pavilion Ticket Office.

For more information regarding upcoming events at The Pavilion, call 281-363-3300 or visit The Pavilions Web site at pavilion. woodlandscenter.org.