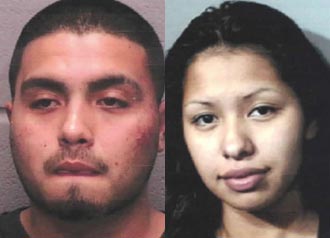 On July 29, 2002, Sheriff Deputy S. Campbell received a call from dispatch regarding a burglary of a motor vehicle in progress in the 3900 block of Cherry Meadow.

Sheriff Deputies arrived at the scene and apprehended the suspect, later identified as Herbert Arnold Contreras, who was located in the vehicle he was burglarizing. Contreras announced to the officers that he had a handgun in his possession. In addition, a search revealed that Contreras was also in possession of narcotics.

Additional information was given to the deputies regarding a suspicious vehicle that had been circling the block waiting for Contreras. Upon further investigation, the driver of the vehicle was identified as Ruth Ivonne Diaz, who was taken into custody for an open warrant. Diaz was arrested for Theft $20-$200 with a Check. She is currently out on bond and has a future court date set for August 12, 2002.

A 16 year old Hispanic male juvenile was also in the vehicle. He was released to his guardian.
Herbert Arnold Contreras of Houston was charged with Burglary of a Motor Vehicle, Unlawfully Carrying a Weapon and Possession of a Dangerous Drug. He is currently out on bond and has a future court date set for August 19, 2002 for all three cases.