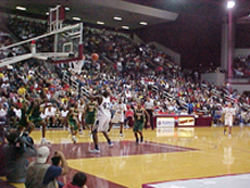 Aldine and Campbell Center hosted a national high school basketball tournament over the holidays, from Dec. 27th through 30th, and local fans got to see the No. 1 ranked team in the U.S., Virginia’s Oak Hill, win back its title in a thrilling come from behind final game. They beat New Jersey’s St. Patrick by a score of 62 to 59, coming back in the last four minutes of the game with points scored on momentum and desire.

The game, however, was marked with an odd controversy. The official scorer gave Oak Hill 2 points they didn’t score, but when she told the officials, they said to leave the score that way. St. Patrick protested, but to no avail. Luckily, the final score was more than that spread, but one wonders how it affected the morale of both teams.