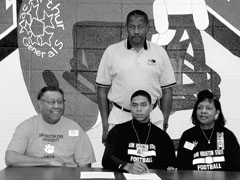 ALDINE– Fifteen Aldine ISD senior football players saw their years of hard work and dedication in the classroom and on the field rewarded on Wednesday, Feb. 5, when they signed national letters of intent.

Eisenhower High and Nimitz High led the way as six players at both schools earned college scholarships. MacArthur High had two players sign, while Aldine High had one.

Eisenhower High head football coach Richard Carson told a group of happy parents and players who gathered on signing day that this was a day they should never forget.

Its a very special deal to be able to sign. All of you guys are special to us and we are proud of you for the hard work you put in to get here, Carson said. But remember, not too many guys make it to the NFL, so use this opportunity youve been handed to get a college education. Thats the most important thing you have in front of you. Youve also got a job to be ambassadors for Eisenhower High School.

This is a very special milestone in the lives of these six young men, who have worked hard academically and athletically year round to reach this goal of having their college education provided for them, Rowe said.

I know they will continue to work hard and make us and their families proud.

Aldine High had one player sign, as quarterback/defensive back Brandon Green signed with Blinn College.