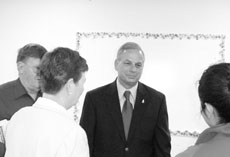 Congressman Gene Green continued his series of Town Meeting last Saturday, with a group of interested citizens meeting at the High Meadows Library.

Topics that he presented included discussion of the possible war with Iraq, the loss of the Space Shuttle Columbia, and education funding.

Musing on Iraq, Green noted that the world is just not a friendly place, and therefore we must act to protect ourselves as necessary.

Topics that were raised by the audience included current high level of unemployment, and many recent layoffs, tax cuts and their meaning, prescription drug policies of the government, floods and flood insurance, crime victims rights, and double taxation policies of the federal government.

Green listened to those who had recently lost their jobs, and mentioned that one large employer in his district, Abitibi paper mill, has closed completely. A member of the audience said she worked for many years for K-Mart, and now has no job and no benefits. Green is applying for additional monies for some of these laid-off workers, and is especially interested in directing them to retraining programs.

Many in the audience seemed concerned about health benefits, and prescription drug policies of the government. One person mentioned that their monthly bill for medicine was over $990 dollars, and was not covered by Medicare. Another had a monthly bill exceeding $500. Green is in favor of including prescriptions in Medicare, and is working toward that goal, he said.

Another major issue raised by several attendees was the problem of flooding in the area. Some wanted to know what was being done to prevent future floods, others wanted to know if reimbursements were available for damage already experienced. Green mentioned flood retention and park plans that were underway for Greens Bayou, which is a federal program, and Halls Bayou, a county jurisdiction. Specifically, a retention pond will be built at Weiss Park, near Aldine Westfield Road.