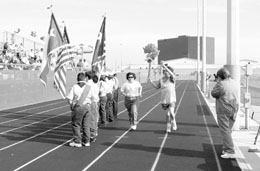 Over 200 Special Olympics athletes enjoyed snacks and entertainment provided by the Aldine Optimist Club again this year. The athletes competed at the Aldine Auxilary Stadium Saturday, March 22. In addition to juice and popcorn, the Optimist Club brought a fire truck, set up carnival games under the bleachers, and took the athletes pictures with a giant chicken.

The clubs involvement with the Special Olympics is just one of many volunteer projects this group provides for the Aldine community. The chicken suit is part of the Optimists largest program that works with Aldine Independent Schools to teach 4,500 fourth graders to avoid drugs. The club uses the costumes in the yearly kick off for the program. They also help provide t-shirts for all the fourth graders, host a banquet for the counselors who administer the program, and send one counselor each year on a weekend getaway.

The Aldine chapter of the Optimist Club, an international organization, began in 1965. The chapter has thirty members on the roles, a third of who is regularly active. Their budget comes from one golf tournament each year and various raffles. Still, this small group makes and big impact in the Aldine area.

Most of the clubs projects involve a partnership with Aldine schools. This Saturday, they will hold a barbecue fundraiser for the Lane Center. Each Spring, they sponsor project prom which reminds prom goers to not drink and drive. They also provide for two Aldine Scholarships which helps area students attend North Harris Community College.

The Optimists support the Aldine FFA by buying a steer and a hog each year. They then donate the meat to needy families. At Christmas time, they work with head AISD nurse to give food baskets to the families of twenty-five students. Another club project helps send four area sophomores to Rice University each year for a weekend of educational opportunities.

The Aldine Optimists recently purchased an inflatable jumping room, called a Moonwalk. They loan it to AISD schools to use as an attendance reward and to other groups.

The Optimists plan all these projects in just two monthly luncheon meetings. We talk about what were going to do or have a speaker. Our meetings are very, very informal, said club president Steve Mead.

The group is always looking for new members. We need more members to try to do more for the kids and to get enjoyment from getting to know other people, Mead said.

It isnt hard to join the Aldine Optimist Club. Prospective members need to fill out an application and be sponsored. Mead said they would help anyone who was interested get involved. Meetings are the second and fourth Wednesdays and are held at either the clubs building on Aldine Bender or at the Clarion hotel on Beltway 8. Yearly dues are $90 and lunch at the meetings is $10. For more information, call Steve Mead at 281-442-8127.