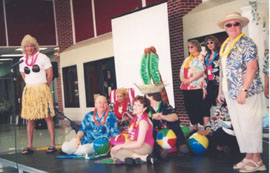 Aldine ISD held a Performance Recognition Breakfast last Thursday morning at Campbell Center, and it was a mix of high praise and high jinks.

With superintendent Nadine Kujawa as emcee, the achievements of the district over the last academic year were reprised, and those with special accomplishments had the limelight on them.

To enliven and offset the serious side of the notices, four skits were interspersed. Staff and teachers acted out varous themes, including American Idol, Beachcombers, the Clean-up Stomp Group, and the Dragnet group.

Kujawa made sure that in between the fun, everyone that deserved it got recognition for their contribution to the central theme of the district, Producing the Nations Best.

She took note of the many national and regional mentions that the district received this year for excellence. She especially noted Just for the Kids, which singled out 20 high performing schools in the district.

Also, the FFA raised $80,000 at their livestock sale for scholarships. In total, their were 649 college scholarships that went to 307 students. This was an increase from last year. The total value of the scholarships was $4,270,000, toward graduates college tuition. There were also 1511 students that achieved the status of Texas Scholars.

She noted that State Senator Mario Gallegos had singled out the district for recognition on the floor of the State Senate in Austin, for its achievements with Latino and African-American students. (See adjacent story).

She noted that the district had just approved the so-called Freeport Exemption, which will allow industries to store inventories within the district tax-free. Although their is some loss of tax revenue from this, she noted that it is exceeded by the jobs and real estate values added by many companies that want to take advantage of the proximity to the airport and the city.

Joey Doyle, art coordinator, was noted for his success with regional and local art programs.

The athletic department was singled out for having 2 more students move into pro football ranks this year, making a total of 18 that have played at the pro level.

Accomplishments were noted in the police department, and the public relations departments.

It was noted that the technology department is wiring the school facilities with fiber optics, and students, staff, and faculty are taking advantage of the internet with a total of 1,000,000 connections per day.

Kujawa said that the district was in good financial shape, but is managing a budget of $365,000,000 this year.

She noted that several grades had just received results of their first TAKS tests, with mixed results that help establish a base-line for improvements in the future.

To close the morning, the several hundred staff, board, and teachers that were assembled sang a song for Kujawa, Theres a Hero in Everybodys Heart.