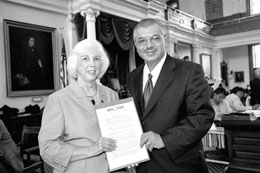 AUSTIN– Aldine ISD was recognized by the Texas Senate for its outstanding work in educating students in the school district.

Superintendent Nadine Kujawa traveled to Austin on Tuesday, May 27, to accept the resolution, which was read on the Senate floor, lauding the school district for the numerous accomplishments the district has reached in academic achievement among its students. The resolution was introduced by Senator Mario Gallegos and signed by Lt. Governor David Dewhurst.

The resolution singled out a number of achievements reached by the district over the last few years. Those achievements were:

The district earning a Recognized rating from the Texas Education Agency for six consecutive years;

Twenty schools in the district named high performing schools by the Just For The Kids Foundation for sustaining high academic performance in 2000, 2001 and 2002 in various academic categories;

The district being named a best practices district by the Just For the Kids Foundation, along with the National Center for Educational Accountability; and The Aldine ISD Board of Education chosen as the Outstanding School Board of Texas in 1998 by the Texas Association of School Administrators (TASA), the Standards of Excellence Award and National Outstanding Marketing Award for its Child Nutrition Department, receiving the National Encore Award from USA Weekend for three consecutive years and its elementary schools being ranked among the best in Texas by Texas Monthly.

The resolution also paid tribute to Aldine ISD for its dedication to the education of young people in Aldine and congratulated its schools for their exceptional accomplishments.