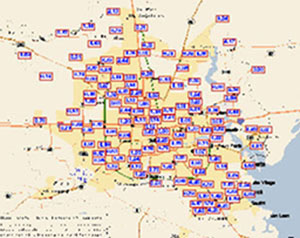 Area residents who will soon be visiting local fireworks stands will find some of their favorites no longer available.

This week, the Harris County Commissioners Court approved an outdoor burning ban as well as a ban on certain aerial fireworks. Among those include in the ban are bottle rockets and missile-type fireworks whose primary design or purpose is to travel self propelled through the air. Ball launchers, such as Roman candles are not included in the ban, however because of the threat of wildfire authorities are recommending they not be used.

During a meeting with commissioners Tuesday, June 3, County Fire Marshall Mike Montgomery said that he had been informed by the Texas Forestry Service and the National Weather Service that the drought conditions the county was facing was continuing and that despite the Monday night thunderstorms there was little sight of relief.

The main indicator that the county uses to determine the likelihood of a wildfire threat is the Keetch Byram Drought Index (KBDI). This index is a system that relates current and recent weather conditions to expected fire behavior. Under usual conditions, Harris County rates about a 200 on the scale. One the scale hits 500, a burning ban is recommended. On Tuesday, the county recorded an average of 608.

Under the court resolution, the ban could last up to 90 days. However, if the KBDI falls below 500 for two consecutive days it could be rescinded.

Montgomery said that the burning ban will effect only unincorporated areas of the county. The activity most likely to be impacted by the ban will be trash burning. There is a provision for trench burning and certain types of agricultural burning. In these cases a permit must be obtained from the state before the burning can take place. Violation of the burning ban is a Class C misdemeanor. Use of an outdoor pit for cooking purposes is not prohibited under the ban.

This is the third time in four years that the county has put out the dual ban on aerial fireworks and burning. The previous times were in 1999 and 2002. In the summer of 2000 the county also issued an outdoor burning ban.