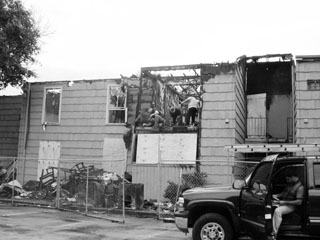 Wednesdays gray sky and drizzling rain seemed to match the mood of Regency Crossing residents as they waited to sift through debris in search of salvageable belongings. Approximately 70 residents are homeless after a fire broke out on an upstairs balcony Monday afternoon and destroyed sixteen apartment units at the complex at 197 Goodson Drive.

Fire investigators continued to work the scene Wednesday searching for the cause of the blaze which brought about 100 firefighters to the scene. Flames spread quickly once the fire reached a shared attic. On Friday, investigators said that the apparent cause of the fire was a child playing with fireworks, that shot from the ground to an upper balcony. However, the child apparently was not aware of the fire that he set, and went inside.

Fire crews took turns battling the blaze during Mondays heat and humidity. About 6 ladder trucks and 12 pumpers answered this 3 alarm blaze, according to HFD.

Everyone escaped the fire safely even though several residents said they never heard a smoke alarm. I didnt even hear one of the alarms go off, said Anita Horta. Horta and her daughter lived in two apartments in the damaged building. My daughter, my grandson woke her up. They heard something outside, she said. Other residents said they too did not know there was a fire until they heard popping sounds and went outside to investigate.

One firefighter suffered minor burns on his neck and was treated at a hospital.

After Mondays fire, the apartment complex relocated residents to empty units in the Casa Verde complex up the street. The Red Cross provided victims with some assistance and the complex took up contributions to help the residents who had little more than the clothes on their back.

One man who had spinal surgery just a week earlier managed to get out with a box of important papers such as birth certificates and social security cards but nothing else. My son was crying last night, My play station is burned! he said.

Residents said that three of the damaged apartments were moved into only a month ago.

Several residents believed that many of the units could have been saved if the water pressure had been higher. Horta said, One fireman climbed a ladder with a big hose but when he turned it on, it looked like a little child peeing. Victims questioned why a pump was not placed in the pool located just feet from the burned units.

Others felt that the fire was fueled when the apartment manager broke out windows in all first floor apartments. That just added oxygen, Horta said. In a panic like this everyone forgets what they are supposed to do.