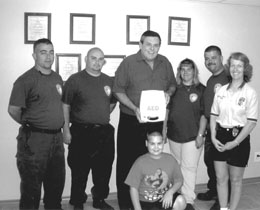 Miracles do happen. Just ask Les Smith who is alive today because his heart attack occurred at the right place at the right time.

On April 27, the 57 year old Smith had a massive heart attack as he walked towards a shuttle bus after the Shell Houston Open. He just fell over, literally like a tree, recalls DeAnne Meaux, chief of the Eastex Fire Department. Meaux was only ten feet away from Smith when he collapsed.

The Eastex rescue team rushed to Smith immediately and began CPR. Luckily, the department has just received an Auto External Defibrillator (AED) and had been trained on the machine just seven days earlier. AEDs are portable devices that can restart a stopped heart using an electrical shock, much like similar machines in hospitals.

The machine that we used, wed just received it. And that was the first time we used it, said rescuer Theresa Rogers.

The Eastex team shocked Rogers four times in order to revive him. Thats a lot of electricity going through the body, said Meaux. But by the time, the paramedics put Smith in the back of the ambulance he was talking to them. You dont normally have a patient who has gone into full arrest and within the next five minutes be able to talk to you and tell you his name, said Eastex fireman Charles Livanec.

Smith had no prior indication that he had heart trouble. Six weeks earlier the doctor gave him a clean bill of health, and Smith had been working out at the gym twice a week. After the heart attack, doctors discovered that three of Smiths arteries were blocked; two in two places. Doctors had to put in five stints in Smiths heart to keep his arteries open.

Smith remembers nothing about his rescue. But doctors said that if he had had the heart attack anywhere else, he wouldnt have made it. It was the Eastex rescue team who was only a few feet away with an AED that saved Smiths life.

Smith soon began a search for his rescuers so that he could thank them. Three weeks after he was released from the hospital, Smith learned it was the Eastex Fire department that administered aid. Smith made a special visit to formally thank the team. Now, according to Meaux, he drops by the station a couple times a week to hang out.

The experience has been special for all involved. That kind of thing doesnt happen everyday, said Rogers.

Meaux said Smith now actively encourages all his friends and neighbors to learn CPR and for more groups to acquire AEDs. Approximately 350,000 people die every year from sudden cardiac arrest. According to some statistics, fewer than one in twenty survives, but AEDs may be able to prevent as many as half of those deaths. Since the late 1990s many have worked to put more AEDs and trained personnel in public places. So far, several airlines, patrol cars and businesses carry AEDs.