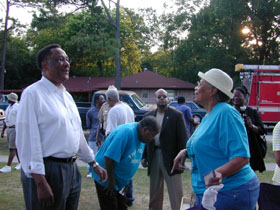 Rosewood Civic Club was one of many area groups to throw a block party for the twentieth annual National Night Out Tuesday. Residents gathered to show that together they can stamp out crime.

Quan recognized the Rosewood Civic Club with a certificate for their hard work on the park renovations and neighborhood evens. Galloway helped residents better enjoy themselves at the park Tuesday by giving everyone free mosquito spray. Thompson too praised Rosewood for their consistent work to improve the community. Thank God youre in my district.

When Rosewood president, Lester Howard, introduced Mayor Brown, he mentioned that some have called him a lame duck mayor since he can no longer be reelected. Brown joked, I keep telling everybody, I aint lame and I aint ducking. He went on to stress the importance of making crime prevention a part of every day. When you have an active neighborhood, you have a better one, Brown said.

Several local residents encourage everyone to get more involved in the community. Code enforcement officer Lester Howard Jr. discussed his efforts to keep the area clear of illegal dumping and abandoned property and cars. I want the place where I grew up and stay to look nice. It starts with us, Howard said. He asked everyone to report problems and help make Rosewood as nice as River Oaks.