Senior Housing planned for site on Mesa Road at Sterlingshire 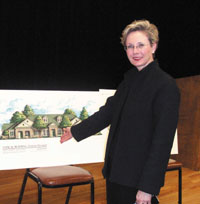 New housing in the Northeast and North Forest neighborhoods has become a very active issue, according to local authorities who monitor this type of activity.

Some of the planned projects are being welcomed by the current residents of these neighborhoods, and some are not.

Therefore, a public hearing with give and take, such as took place last week at the Shadydale Elementary School, are important for both sides to share information and views.

The meeting was attended by about 30 people, including North Forest superintendent Dr. Elaine Berry, and leaders of several super neighborhood groups.

The School districts are especially interested, because new housing tends to bring in not only new taxes, but in many cases school children that will affect the district.

However, in the case of this new project, known as Mesa Seniors Apartments, children will not be an issue, since this project of 150 apartment units is a Seniors only project, meaning that at least one person in the family must be over 55 years of age.

According to developer Sally Gaskin, units will be one and two bedroom in size, with each unit also having an enclosed garage.

Due to a relatively new federal subsidy program, known as tax credit financing, the rents in these units will be reasonably low, and most residents will have to have income within guidelines to qualify to live here.

The total project will include 150 new units, built at a cost of about $90,000 per unit, with total project cost at $13,000,000. Plans presented at the meeting showed expensive brick exteriors, and patios, enclosed garages, landscaped grounds, an an extensive Amenity Center, with offices, meeting rooms, mail areas, business center with computers, activity room, club room, fitness room, and laundry. Other recent projects in the area, especially along Little York, have not been popular with the community due to the potential influx of large families, traffic, school overpopulation and low cost housing, but this project seems to be a different type of proposal, and met with general approval from the group that were present.