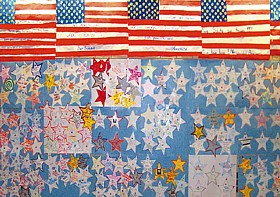 Since the war in Iraq began, more than 600 American soldiers have been killed. At HISDs Sam Houston High School, a proud school with a strong ROTC program and a deep connection to the military, students remembered every one of the fallen soldiers.

On Thursday, April 15, students in the Leadership class at Sam Houston began erecting an Iraq Memorial Wall. The students lined the main entrance of the school with stars–one for each soldier killed in Iraq.

Leadership Teacher Joanne Dawkins said the students came up with the idea as a public service project. The issue is personal for Sam Houston students. Several former students are serving in Iraq, and one teacher has a son who is serving there.

Our kids have a very deep connection to and appreciation for the military, Dawkins said. Theyve grown up around military families. They understand duty and honor. They are proud of the tremendous sacrifice our soldiers in Iraq are making. As a public service project, they wanted to do something important, something the community will remember.

In addition to the stars for each fallen soldier, the memorial wall will feature flags depicting facts about the war. Sam Houston High is located at 9400 Irvington.