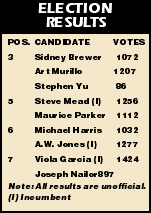 ALDINE – It was a long night for those counting ballots at the Aldine Administration Building, due to a heavy turnout including early voting, but just before midnight on Saturday, the results were known.

As reported by Mike Keeney of Aldine ISD to the Northeast News, the voters returned three incumbents to the board. These are Steve Mead, A. W. Jones, and Viola Garcia. Mead was elected for his first full term, having been appointed earlier in the year to fill the position of Carlos Diaz, who resigned. Jones will serve another term, having been on the board for the last 26 years. Garcia, the current board president, first joined the board in 1992 as an appointee. Garcia showed strong support by the community, receiving more votes than any other candidate.

Position 3 did not have an incumbent after the resignation of Leonard Marcella. As a result, three candidates ran, and Art Murillo was elected by several hundred votes over Sidney Brewer, with Stephen Yu having a small showing of support. Murillo works as an outreach representative for METRO, and previously was on the staff of State Legislator Kevin Bailey.

Returning to the board will be trustees Marine Jones, Emmett Hill, and Rick Ogden. Candidates Brewer and Parker had campaigned on a slate of change, no budget or tax increase, and emphasis on inclusiveness and teaching excellence. The elected trustees had emphasized teaching excellence as their goal, and they are expected to support the current boardÕs direction and administration.

In the other election last Saturday, voters within the City of Houston limits decided in favor of Proposition 1, by a 72 to 28 percent margin, which allows the City to renogotiate long term future employee pensions. This promises to eliminate or reduce the need for a tax increase to meet obligations that had been made by the previous administration.