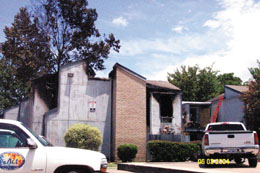 Two women in their thirties were injured during a two-alarm fire at the Country Haus condominiums on Cotillion and Aldine Bender. One woman suffered second and third degree burns on her stomach and chest. The other womans hands were seriously burned.

The fire broke out after three p.m. Wednesday. The fire was almost directly across the street on Aldine Bender from a City of Houston fire station. What started out as a one-alarm fire quickly escalated to two-alarms, calling in more firefighters. The blaze destroyed four units while others were damaged by smoke and water.

Cause of the fire is under investigation at this time, due to its rapid spread. In the meantime, the management has hired a specialty remediation firm to clean and restore the premises, and that work is currently underway.