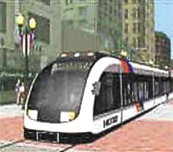 Metro is holding meetings throughout Houston this month, to gain input on changes that the public would like in the proposed extension of the light rail system to Northline Mall, and Southeast to the Gulfgate area.

The meeting for the Northeast area was held Saturday morning, June 26, at Jeff Davis High School on Quitman at 9 am. Metro staff was on hand to explain the alignment of the rail, as it travels north from the University of Houstondowntown to Northline Mall, and to answer questions. Dozens of interested citizens turned out. The 5.5 mile extension will follow several surface streets, including Main Street, Irvington, and Fulton. Metro staff and consultants explained alternate routes being considered, including Irvington/Fulton alternatives. Stations will be located approximately at Quitman at Main, Irvington at Cavalcade, Fulton at 610 North Loop, and Fulton at Northline Mall.

In the next phase, the line will continue along the Airline Drive alignment to Greenspoint Mall, and eventually to Intercontinental Airport.
Metro directors have recently objected to some of the alignments designed by staff, and asked for further study, to see if existing railroad right-of-ways could be used to avoid conflict with street traffic. Three other routes were suggested after the Third series of Open Houses for the North/Hardy line. These include the BLUE route, primarily along I-45; the RED route, primarily along the Hardy Toll Road; and the GREEN route, along Airline Drive and the I-45 frontage road instead of Fulton.

Construction of the extensions is scheduled to start in 2006 for the line to Northline, but it will not be available for use until sometime in 2009, according to Metro.

Additional meetings for the Southeast corridor are scheduled Monday and Tuesday of this week on Griggs Road. Further information is available from Metro at 713-625-4000 or their website, www.ridemetro.org.