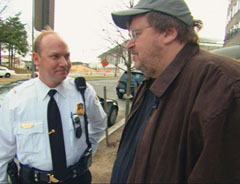 In “Fahrenheit 9/11,” as in “Bowling for Columbine,” filmmaker Michael Moore tries a little too hard to make too many arguments and oftentimes too many jokes. The result is that the films come off as uneven and unfocused.

With “9/11,” Moore tries to show how George Bush stole the 2000 election; link the Bush family and the Bin Ladens; point up the failure of the president to respond quickly enough during the first couple hours of the attack on 9/11; show how the administration botched the “liberation” of Afghanistan and then lied about WMDs in Iraq and made specious connection between Bin Laden and Saddam Hussein in order to invade Iraq … the list goes on. That’s a lot of ground to cover, a lot of allegations to prove and only two hours in which to do it.

“Fahrenheit 9/11” would’ve been a great film if Michael Moore had stayed behind the camera more and concentrated on telling a story rather than promoting himself and his agenda. Where the film is truly powerful is in the moments where Moore lets the camera run and allows real people to tell their story.

Case in point: There are a few sequences featuring Lila Lipscomb, a Flint, Mich., mother whose daughter served in the Gulf War and whose son was sent to Iraq. She’s proud of her children’s military service; she supports the troops, wears a “multicultural” cross over her Mickey Mouse sweatshirt and hangs the American Flag proudly outside her house every day. Her faith in America, our troops and the choices of the Bush administration is unshakeable.

Then, she gets a phone call.

Her son has been killed in a helicopter crash.

With her husband by her side, Mrs. Lipscomb reads aloud her son’s final letter to her. When her voice cracks as she reads “Thanks for the Bible,” her grief and disillusionment and anger become overwhelmingly palpable. The final scene with Mrs. Lipscomb traveling to Washington is absolutely gut-wrenching.
Where the film also is extremely powerful is in the video footage of American troops in Iraq and of the effects of the war on the civilian population — video that isn’t shown on American television.

Those scenes — and others where Moore isn’t in front of the camera and we see real people and their stories — are the reason you should see this film, regardless of your political leanings.