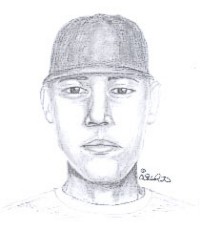 The Houston Police Department is seeking information leading to the identity, arrest and charges of the suspect depicted on this composite sketch. This suspect is wanted for Aggravated Robbery.

On Thursday June 3,2004 at approximately 2:30A.M., the two victims were working at the C & M Moving and Storage Company located at the 2800 block of Canal when they were approached by this suspect. The suspect pointed a large pistol at the first victim and demanded his wallet. This victim complied and the suspect took the money and gave the wallet back. At that point a second suspect approached and suspect #1 demanded the second victims wallet. This victim also complied and as the suspect were walking away, the second suspect observed the victims white 2003 Honda CRX in the parking lot. The suspect demanded the keys and the victim stated they were inside the vehicle. Suspect#2 then jumped in the vehicle and suspects fled the scene being followed by a brown 4-door Honda Accord occupied by four unidentified Hispanic males. The stolen vehicle was later recovered at the 5600 block of Royalton.

The four other suspects were described only as young Hispanic males driving an older 4-door brown Honda Accord.

If you have any information in regard to this case, please contact the Crime Stoppers Hotline at 713-222-TIPS. Please refer to case #85528104. Crime Stoppers pays cash rewards of up to $5000.00 for information leading to any felony arrest.