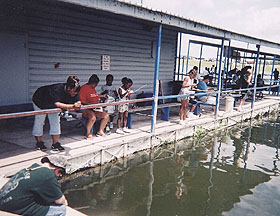 Recently, more than 30 local kids participated in a fun-filled day of fishing at the Boy Scout Troop 358/Wal-Mart Kids All-American Fishing Derby. The event was held at Lake Somerville Marina. Featuring fishing, good food, and fun contests. Every child in attendance received a goody bag with special souvenirs from the event.

Though the event was held primarily for casual enjoyment of area youth and their families, some contests were held in conjunction with the derby.

One featured contest was the Fujifilm ÒBig FishÓ Contest. Chris Mejia landed the biggest fish of the day, winning a certificate along with a tackle box full of fishing items. As a result of his big accomplishment, Chris now qualifies to match his catch against ÒBig FishÓ winners from other derbies around the state. The state winner is then measured against winners from all over the county. The national Fujifilm ÒBig FishÓ winner will receive a $500.00 savings bond and gift basket from Fujifilm.

All contest participants displayed their skills in Zebco Casting Contest. They were awarded certificates and qualified to enter a national drawing to win a $1,000.00 savings bond from Zebco.

The fishing derby was catch and release. Participants caught and released over 150 fish. Chad Svetlik took first place in most fish caught.Cody Cloninger placed second and Carrin Cross placed third.Chad and Cody received Zebco rod and reels. Lake Somerville Marina supplied fish for all participants and volunteers later that night for the camp out.

The Boy Scout Troop 358/Wal-Mart Kids All-American Fishing Derby was a success thanks to the volunteers who baited hooks, untangled fishing line, and served food to all participants.