Hundreds turn out for National Night Out 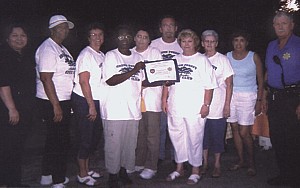 August 3 was one of the hottest days this summer. Still, hundreds of northeast Houston residents left their air conditioned homes to party with their neighbors on National Night Out.

Several communities in the Northeast News coverage area held National Night Out events including the Aldine Sheriffs Storefront. All reported large crowds who had a wonderful evening.

One of the largest parties had about 200 people in attendence and was put on by the Green Forest Civic Club, Fairgreen 1,2,3,4 and Eastex Freeway Forest 1,2,3,4. They dealt with the heat by stringing extension cords to the empty lot and plugging in fans.

Green Forest Civic Club president Shirley Reed said the event was a success and helped neighbors get to know eachother and their community. This will help reduce crime with the awareness of the storefront and that we are concerned about each other, she said.

Reed said that when new neighbors move into the neighborhood there is always a phase in which people might wave but not talk because they are unsure how to fit into the new area. National Night Out breaks down barriers and brings neighborhoods together. Lack of knowledge causes people to stand off. Being informed causes people to come togther, Reed explained.

Attendees enjoyed good food and visited booths from South Texas Dental, the health department and received a cholesterol screening.
We were well represented by our elected officials, said Reed. Senfronia Thomspon, Kevin Bailey and representatives from Gene Greens office stopped by the party.