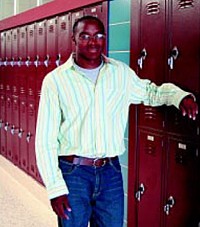 MacArthur Senior High School junior Alexander Johnson has been named one of three finalists for the 3rd annual George H.W. Bush/Kiwanis Sports Hero Award. The winner will be announced on Tuesday, Aug. 24, during a dinner at the Intercontinental Hotel.

The award honors a Houston-area football player who is a standout on the field and in the community. Johnson is a two-year letterman for Jerry Drones’ Generals. When the 2004 season begins, Johnson will be a starting linebacker for the second straight year and will also see duty at tailback.

The well-spoken Johnson is also a star in his community and in the classroom. He volunteers in the nursery at Wheeler Avenue Baptist Church and is involved in various youth organizations at the church. Academically, Johnson carries a 6.8029 grade point average taking AP (advanced placement) and GT (gifted and talented) classes.

MacArthur Senior High principal Rose Avalos said Johnson is a joy to be around. “Alexander is the ideal student,” Avalos said. “He is a fine young man. He is a leader on and off the field. He has a strong faith and shares it with others.”

Drones echoed Avalos’ statement.”Alexander is a coach’ s and parent’ s dream,” he said. “He’ s a shining example of what being a student-athlete is all about. Even though he was a sophomore last year, he was
one of our team leaders and we’re expecting more of the same from him this year.”

Johnson said he was honored to be nominated for the award. “I was elated to get this far in the process,” he said. “This is an honor that I will always remember.”

The likeable junior added he learned at an early age the importance of sharing his time and talents with others in the community.

“I’ve always been taught that you give out what you put in (to others),” Johnson said. “It’s important to help out in the community and in any way that I can. I really enjoy working with the young kids in the nursery at my church. I know all of their names.”

After high school, Johnson would like to attend the University of Southern California and study pre-law. He is the son of Maurice and Deborah Johnson.