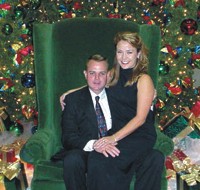 Things have been a bit quiet around the Northline Mall management offices the last few weeks since marketing coordinator Michael Corcoran shipped out to serve in Kuwait. In addition to his career at Northline Mall, Corcoran is a heavy crane operator in the Navy Reserves. He has served in the military over ten years and will soon be promoted to E7 Chief Engineer. Corcoran and his unit are in Kuwait for what could be a six month to one year deployment to off load and in load supply ship for the war effort in Iraq.

“We are a family here. We are all beginning to miss him,” said coworker Lee Garza.

Corcoran’s absence left a mark on the staff at Northline which has grown used to Corcoran’s mischievous humor and practical jokes. One of Corcoran’s favorite toys around the office was a dart gun. “I’d sit at the computer and the next thing I know, there’d be a dart on the computer screen,” Lee said. The staff said Corcoran usually got out of trouble by flashing a smile.

When he is not serving in Kuwait, Corcoran lives in the Woodlands with his wife Brenda. He often works to improve his truck and remote control boat. Corcoran also competes at slalom skiing. “He may try to talk the admiral into towing him behind the boat,” said mall director Rebecca Victor.

The Northline Mall office sent Corcoran away on a positive note with a farewell party at his favorite Mexican restaurant. The office staff can’t wait to hear how Corcoran is doing in Kuwait. They are especially curious about how he is dealing with the heat. The office thermostat was often fought over by the coworkers. “He likes it cold,” they said.

While the office crew misses Corcoran’s antics around the office and the work he does promoting the mall, they know he is fulfilling an important role in the country’s military defenses. They just look forward to a barbecue with some cold beers to welcome him back home.