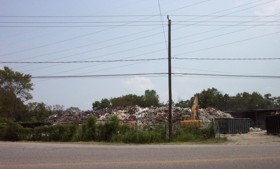 Trucking and Waste, has been illegally disposing of waste (including demolition debris, household garbage, cardboard, plastic, tires, and wood) at 16120 Market Street and 14807 Garrett Road.

The property at 16120 Market Street, dubbed “Mount Trashmore” by neighborhood residents, is in Channelview. The property at 14807 Garrett Road is in the Sheldon area. Earlier this year, citizens began calling Harris County to complain about odors and rats coming from the Market Street property. Harris County Pollution Control repeatedly cited Mr. Gandy for public endangerment and failure to comply with various environmental laws. The Harris County Fire Marshal issued a Fire Marshal Order against Gandy for numerous fire hazards.

On August 4, 2004, Judge Randy Wilson issued a temporary injunction against defendants Gandy and Halco. Judge Wilson found that both 16120 Market Street and 14807 Garrett Road were in violation of state law and that the large quantities of combustible material stored at these sites endangered human health and welfare. The injunction orders the defendants to stop disposing of solid waste at these sites (unless the defendants obtained a permit or registration from the Texas Commission on Environmental Quality) and to remove all existing waste from the sites.

In discussing today’s court ruling, Stafford stated, “The County Attorney’s Office is delighted with the Court Order. We believe that this ruling protects the public health and safety. It achieves justice for the citizens who have suffered so much.”