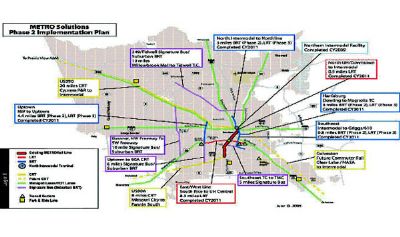 Houston’s METRO announced a revised mobility plan last Monday, which was quite different from previously announced plans, and some critics say not what the voters were asked to approve in November 2003.

Officials from Metro stated that the new plan was necessary to get approval from the federal government for funding, and to win the support of local congressmen Tom DeLay and John Culbertson.

Metro officials claim that the new plan will be more cost effective and efficient, will get higher grades and therefore more funds from the Federal Transit Authority, and will put a more comprehensive area-wide system into operation at an earlier date than previous plans.

The main features of the “Phase 2 Implementation Plan of Metro Solutions” call for a new light rail line running east-west from the University of Houston to the Galleria; Heavy rail or Commuter Rail from the existing light rail termini to Fort Bend along US90, and to Northwest Houston along US290; and the substitution of “Bus Rapid Transit” for Light Rail on previously announced lines to Northline Mall, Harrisburg, and the Southeast.

This change in the light rail scheme has many local businesses and residents questioning why they are receiving less than previously promised.

However, Metro says that a BRT system will be built with separate rights-of-way, signalization similar to a train, express schedules, and cars that are similar to light rail, except that they run on rubber tires and use diesel or gasoline.

In addition, Metro says that rails will be installed in these guideways, and conversion in the future to light rail vehicles is feasible and actually in the long range plan.

Missing in the Phase 2 plan is any indication of a connection to either of the major airports by light rail or even BRT. This had been a major element in the Official Metro Solutions Plan, as voted on November 2003.

Congresswoman Sheila Jackson Lee organized a citizens forum last Saturday, at TSU, to meet with Metro officials and discuss the new plan. Many expressed frustration with both the changes, and the lack of timely communication from Metro officials. Rev. Bill Lawson typified Metro’s actions as a “slap in the face” to residents of the southeast area, who are actually the largest group of transit riders.

State Senator Mario Gallegos, representing North and Northeast Houston, said it was a matter of losing trust with Metro, and his constituency, when promises are not kept regarding light rail lines.

In a press release, Congresswoman Lee stated that “Many local stakeholders feel that the plan presented substantially differs from that which was the subject of the referendum.”