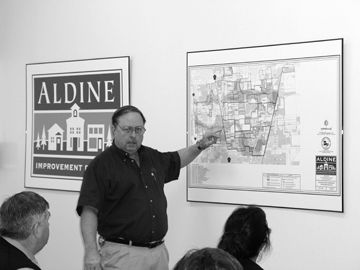 WORK TO BEGIN IN APRIL


A 10-year storm has a 10 percent chance of happening any given year. A 100-year storm has a 1 percent chance of happening any given year.
The area expected to receive the largest reduction in water surface elevation from the Keith-Wiess Stormwater Detention Basin is between Jensen Drive and Homestead Road. Generally speaking, the basin will ensure safe storage of stormwater and reduce the risk of flooding for this area.
Construction on the basin, which calls for the excavation of approximately 1.8 million cubic yards of soil, is expected to begin in April, 2006 and take an estimated three years to complete.
While the basin?s primary purpose lies in reducing flood risks for those in the Halls Bayou watershed, it also will be the site of new park amenities, including a 1-mile concrete hike and bike trail, 2 miles of soft-surfaced nature trails and a footbridge over Halls Bayou, recreational equipment, habitat and wetlands plants, three soccer fields, interpretative signs, a fishing pier and a wetlands boardwalk.
These amenities will be paid for by a $2 million grant from the Texas Parks and Wildlife Department and from monies from Harris County, the City of Houston and the Aldine Community Improvement District.
The basin is part of the District?s $130 million conceptual plan to excavate six regional detention basins along Halls Bayou, in addition to widening and deepening the channel and several bridge modifications.