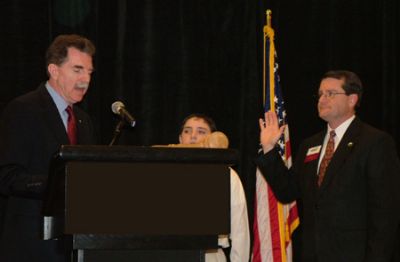 By GILBERT HOFFMAN
GREENSPOINT The North Houston Greenspoint Chamber of Commerce held their annual Awards Banquet and Installation of the board, last Thursday lunch, Jan. 19th at the Houston Airport Marriott.
Jerry Lowry, of the Greater Greenspoint District, was installed as the new Chair of the board. Other new officers are Bill Ginder of Caldwell Watson Real Estate as Chair Elect, Rosemary Buske of Contact Promotions as Secretary, Bill Townsend of North Houston Bank as Treasurer.
Highlight of the luncheon was the presentation of annual awards.


The Company of the Year Award was given to Brookside Funeral Homes and Memorial Park; the Citizen of the Year Award went to Bill Ginder; Business of the Year was awarded to Magoos PrintShop; Committee of the year was the Gala Committee; Chamber Volunteer Award went to Bill Townsend; a special award for Community Development was given to Rep. Kevin Bailey for his work in creating the Airline Improvement District, and to Houston Mayor Bill White; the Pinnacle Award for support of the chamber over a number of years went to several: Ralph Wheeler, Jerry Lowry, Rosemary Buske, and Ray Shotwell; and the Shining Star Award for outstanding volunteer effort went to Bill Hester, Kelli Knapp, Bill White, Martha Velazquez, Mary Skaff, and Mark Hecker.
In his acceptance remarks, Lowry shared his vision for his 2006 term. He said that he wanted the Chamber membership to be Connected for Growth.
In detail, he said the emphasis in the New Year was on new, in particular:
 New location – in the heart of our service area, where east and west anchors meet at the doorstep of the 2nd largest domestic airport
 New Vision – Houstons Gateway for Global Growth, where we take advantage of being the gateway to Houston and the World
 New Look – a new logo that gives freshness to the image of the organization
 New Vitality – a streamlining of the volunteer organization and an increased utilization of evolving technologies.
New board members who where installed are Ray Bennett, ABS; Cheryl Canova, GFI Management; Margaret Eyster, Magoos PrintShop; Bill Ferebee, ODonnell, Ferebee, Medley & Keiser; and Ralph Wheeler, YMCA.
Retiring board members are Erv Baumeyer, Terry Burge and Nadine Kujawa.
Other Vice Chair officers that were installed are Bill Hester (Business Development), Dr. David Sam (Community & Governmental Relations), Jill Boullion (Marketing & Fundraising), and Mary Skaff (Membership).
Lowry also stated that the focus in 2006 is to advance the Chamber as a thorough and efficient organization that is responsive to the volunteers time, the members resources and the businesses needs.