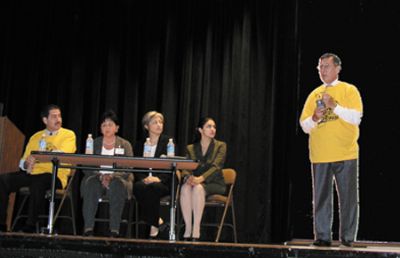 NORTHEAST HOUSTON Hundreds of parents, educators, students and community supporters gathered in the auditorium of Sam Houston High School last Wednesday evening, to voice support for keeping the school open in spite of a warning from the HISD board that it will close the school if state TAKS ratings dont improve by the end of the 2007 school year.
However, speaking for the administration, Superintendent Abe Saavedra claimed their was no talk of closing this school. We have do doubt that we will have the success to keep this school open.


This statement came in spite of the fact that the HISD trustees voted 8-1 at a meeting on August 10th to close the school if it didnt improve. Lone trustee Kevin Hoffman voted against the resolution, and he was warmly supported by the public speakers later in the meeting, just as trustee Natasha Kamrani was criticized for her vote not supporting the school and not showing up often enough, even though it is in her District 1.
The meeting was organized by City Councilman Adrian Garcia, who spoke in opening remarks about the need for the community to pledge their support to help the school.
Principal Aida Tello, in a prepared slide presentation, pointed out that the schools performance was not really that bad, and in the TAKS scores, in the 20 categories that are tested, SHHS students achieved scores above recognized in 10 categories, acceptable in 8, a bye in 1, and only 1 category had an unacceptable rating. This had 3%, or only 9 students that couldnt pass this part of the exam, she pointed out, but 97% did pass.
In addition, Tello, who is starting her 3rd year leading the school, said that she sets daily and weekly goals for the staff and students, and expects that performance will improve by the end of the year.
Her motto, emblazoned on yellow tee shirts, is Yes We Can. Si Se Puede!
After the opening remarks, the speakers on the platform and then from the audience took their turns at the microphones.
An unusual show of support came from the Consul of Mexico, Carlos Gonzalez, who said that he was there to support the school, because we are concerned about education in the Hispanic community. He indicated that Mexico had chosen Sam Houston HS for extra support over the next school year, including a Mexican Institute to be held with SHHS on Sept. 12th.
Sen. Mario Gallegos said that education and healthcare for his constituents are his number one priorities, and that he had just come from a meeting that day with state education commissioner Shirley Neeley, regarding school performance and the TAKS tests.
Rep. Kevin Bailey said that closing SHHS was not acceptable, and that he will press HISD to come up with a plan to keep the school open. He said that for a long time, schools on the North side of Houston have been underfunded, without enough resources, and it was time for that to change.
Rep. Farrar pointed out that we should include the feeder schools, as well as high schools, to achieve improvement. She noted that in successful schools, Homework is emphasized, as is parental involvement with the students.
A presentation by Yvonne Rodriguez of the SHHS staf pointed out the importance of volunteers and parent involvement, and said that signing up on the HISD web site was the first step.
She said that students with mentors:
-have a better attitude
-have better attendance, behavior
-are more responsible
-are more enthusiastic
-have more and better interaction with their peers.
At this point, the meeting was open for comments and questions from the audience and parents.
Parent Maria Mendosa led off, with scathing remarks against the administration and trustees for lack of support over the years. She called for more tutoring and pay incentives, and noted that 8 of the 9 trustees had voted Aug. 10 for closure at the end of 2007 school year, in a meeting that was not publicized for the community.
Parent Sharon Justice Black criticized trustee Kamrani for not caring enough about SHHS.
Sue Freshauer, an alumni, pointed out the proud history and many accomplishments of the school and students. Successful alumni engineer Ruby Medina, and attorney Sandra Solis, pointed out the good education they had.
Students Marisol Cantu and Emmanuel Amando spoke about how important the school was to them, and Emmanuel said you are shutting down our dreams, our future…
Alumni Dana Castro spoke about the mistake of closing all the special programs such as shop, cosmetology, and band, and how important these were to some of the students. Parent Ofelia Monte spoke about keeping the Tigercadet drill team, and how important it was to morale.
Saavedras closing remarks pledged to reduce class size in core subjects, and work together with the school to keep it open and successful.
The next community meeting is scheduled for Wed. Aug. 30th at 6:30 pm. at the school.