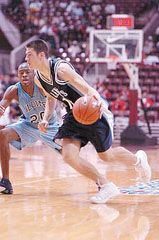 The tournament will feature some of the top teams from across the nation and Texas, including Aldine Senior High and one of the states top players in Gary Johnson, a 6-foot-7 forward who recently signed with the University of Texas.
USA Today has tabbed the Academy Invitational arguably the nations best top-to-bottom event.
The National Division includes three of USA Todays top four-rated teams in the country as Norcross (Georgia), ranked No. 2, DeMatha (Maryland), ranked No. 3, and St. Patricks (New Jersey), ranked No. 4 make up part of that bracket. The five other teams in the National Division will be Christ the King of New York (ranked No. 21), Kingwood (ranked No. 23), Alief Hastings, Rainier Beach (Washington) and Rice (New York).
The Texas Division will consist of Aldine Senior High, Bellaire, Klein Collins, Houston Madison, Strake Jesuit, The Woodlands, Westbury Christian and Houston Yates.