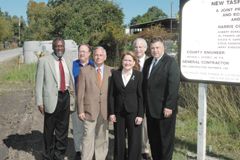 NORTHEAST HOUSTON Groundbreaking ceremonies took place on Nov. 8, for a demonstration project to improve water and sewer service to about 96 homes on Vivian, 3 sisters, and Nuggent Streets.
The Aldine Improvement District, with City, County and federal help will cooperate on a new sewer construction project. This demonstration project may be followed by at least 11 other areas in the Aldine Improvement District service area.

Tasfield was chosen for the project because no sewer service was available, and a large number of septic systems were failing, according to David Hawes, of Aldine Improvement District. The Tasfield neighborhood is near the intersections of US59 and Little York. The area borders the city of Houston, and homeowners will be eligible to get city sewer service after the construction. Residents will pay about $15 a month to join the city system. Water currently is provided by Aquatech to homes.
Because residents qualify under HUD income limits, a HUD grant was available for $850,000 for construction. The Aldine I.D. is contributing about $200,000 to the project.
The Aldine district is now studying an additional neighborhood for this type of improvement – North Houston Heights. They have approved an engineering study of $350,000 to continue the planning work.
Work on these projects is now conducted through the Aldine Water and Sewer Authority.