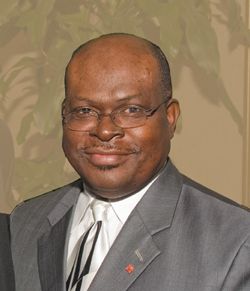 Northeast Houston said goodbye this month to a major community leader. Dr. David Sam, president of North Harris College, moved to Illinois this month to accept a position at Elgin Community College in order to be closer to his wifes family.

For the past seven years, Sam was an active member of many community organizations. He served on 14 advisory boards for organizations around the city. Locally, he was the president of the Humble Rotary Club, vice chairman of the North Houston Greenspoint Chamber of Commerce, and a board member of the Greater Greenspoint Redevelopment Authority, Leadership North Houston, Northwest Assistance Ministries, and the Aldine-Greenspoint YMCA.
Sams diverse educational background helped him become involved in a variety of community projects and bring a gentle style to resolving issues. Sams undergraduate degrees were in economics, political science, and history. He then earned an MBA of finance and marketing, and a masters in law and diplomacy. He received a PhD in philosophy from Tufts University, and in 2001 he earned a law degree.
Sam is a firm believer in the importance of education and its ability to transform lives. He came to America from Ghana as a foreign exchange student in an Illinois high school and then returned to America for his college education.
Sam served as a role model to North Harris College students as far as the importance of a continuing education. Under his leadership, NHC increased retention and graduation rates; received several federal grants; and expanded the campus through new construction and renovations of more than $23 million.