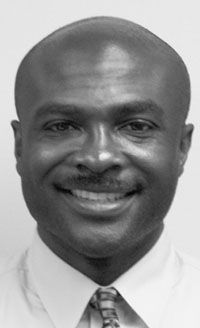 The Aldine ISD Board of Education named Deon Samuel director of athletics during its March 20 board meeting.
Samuel, who previously served as the districts director of athletic services, succeeds Daryl Wade, who left AISD in December to become the athletic director of the Houston Independent School District.
Samuel will assume his new duties immediately.
Samuel received his bachelors degree in health and human performance in 1992 and his masters degree in administration and physical education in 1994 from Prairie View A&M University.
Samuel began his teaching career in Aldine ISD in 1994 and was assigned to teach physical education and coach at Shotwell Middle School. In 2002, he transferred to Eisenhower Ninth Grade School as a physical education teacher and coach. He moved into his present position as director of athletic services in 2004. Samuel has 13 years of experience in the field of education and he has spent all 13 of those years in Aldine ISD.